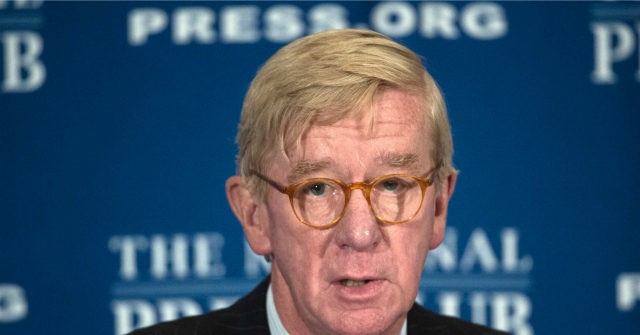 Never Trump presidential candidate Bill Weld was only able to raise $688,000 during the second quarter of 2019.

Weld, the former Republican governor of Massachusetts and failed 2016 Libertarian candidate, launched his challenge against Trump for the GOP presidential nomination in the middle of April.

ABC News reports that Weld had 7,000 individual donors, which means the average donation was just $98.

Weld’s senior adviser is Never Trumper Stuart Stevens, the man who oversaw Mitt Romney’s disastrous 2012 presidential campaign, and he tells ABC that everything is going exactly according to plan.

After telling ABC he is “satisfied” with this catastrophic failure to raise money, Stevens said the following, presumably with a straight face:

[We’re] confident that we will have, from all sources, the resources necessary to communicate via both broadcast and digital means, in all key states, Gov. Weld’s message that America deserves better than it is getting today: it deserves the best traditions of the Republican Party, not the opposite of those tradition.

Yep, they got Drumpf right where they want him.

Or as Inspector Clouseau might put it: The ol’ raise-no-money-to-win-the-presidency ploy.

Where the hell is all that Never Trump money?

From the looks of it, all these rich, establishment Never Trumpers are not putting their money where their mouth is.

You would think this group, and all the trust funds that come with them, would be able to bundle up enough during one Carnival Cruise to at least drag Weld over a million dollars:

Weld might not be raising any money, but Never Trump does have a strategy.

Yep, Our Betters have it all plotted out.

If Trump loses the expectations game in New Hampshire, many tactical opportunities could open up. For example, different challengers could focus on regions where Trump is vulnerable: Weld’s melding of fiscal conservatism and libertarian principles could work in New Hampshire, on the West Coast, and in the Rocky Mountain states.

Part Two – Wait for the Coming Trump Meltdown (You know, the meltdown Never Trump’s been predicting since he announced in 2015; the meltdown never arrives but definitely will cuz Drumpf):

Trump’s overwhelming popularity within the GOP will make it very difficult to unseat him in the primary unless his administration experiences an almost total meltdown over the next year.

Weld was the governor of Massachusetts between 1991 and 1997. What state neighbors Massachusetts, sits within the Boston media market, and over the last 20 to 30 years happens to have become home to a huge number of moderate-conservative types who normally vote Republican and have exiled themselves from “Taxachusetts”—but many of whom still commute in to Boston for work every day?

That’s right, it’s New Hampshire, home to the first-in-the-nation primary, a virtually non-existent tax regime, and a propensity for the weird–like a protest that occurred in front of the state capitol there about 10 years ago featuring yoga practitioners doing “down dog” while exercising their Second Amendment rights, fully armed with big guns.

Twenty-eight years ago — twenty-eight — a political commentator named Pat Buchanan, the Donald Trump of 1991, was able to raise $875,000 from 2,016 donations during the first ten weeks of his insurgent primary campaign against then-President George H.W. Bush.

According to three separate inflation calculators, Buchanan’s $875,000 would translate to $1.6 million in today’s dollars. So Buchanan raised twice as much money from three times as many donors, and Buchanan was not an establishment darling like Weld. In fact, he was the exact opposite, a populist political commentator taking on the establishment with none of Weld’s advantages or connections.

Evan McMullin — remember him — the deadbeat whom Never Trump ran as a spoiler in 2016 in the hopes he could deny Trump Utah’s six electoral votes? The creepy little guy Never Trump ran to benefit Hillary Clinton, even though Never Trump swears up and down they didn’t support Hillary Clinton? — McMullin launched his campaign on August 8, 2016, just 12 weeks before Election Day, and Open Secrets reports that this former nobody raised $1.6 million.

That’s twice as much as Weld.

Bill Weld is a former Republican governor and he’s unable to raise as much money as Never Trump’s charisma-free vanity candidate who earned the nickname McMuffin.

Reason.com puts this failure in even starker terms: Weld’s 7,000 donors would not have even come close to earning him a spot in that first Democrat debate where 20 Democrats qualified, including more than a few weirdos. You see, to qualify for that debate, a candidate had to attract 65,000 donors.

Imagine attracting fewer donors than a self-help guru and a lunatic.

During this same fundraising quarter, Trump, with the help of the Republican National Committee, raised $105 million.

But the Never Trump TrueConCucks are pretty sure that the pro-abortion Weld, who endorsed Barack Obama in 2008 and “vouched for” Hillary Clinton in 2016, is the man who can … “restore conservatism.”