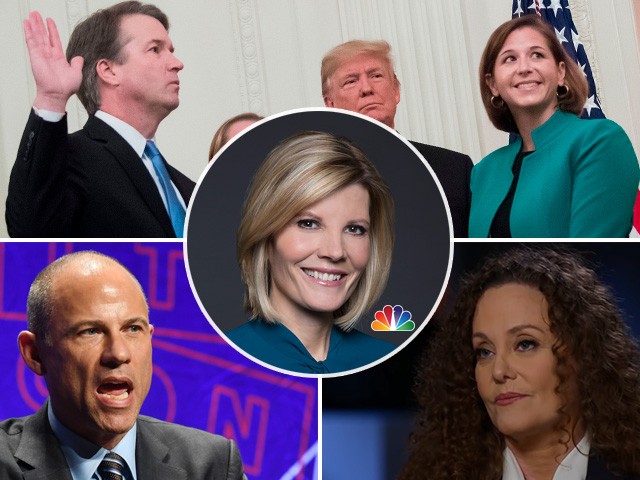 NBC’s Kate Snow offers only falsehoods and double talk to explain why she and her employer hid crucial facts that would have cleared then-Supreme Court nominee Brett Kavanaugh of gang rape allegations.

On Friday, Breitbart News reported that, although NBC had the information a full week prior to his October 6 confirmation, NBC covered up news that would have cleared Kavanaugh when it mattered most — during those intense final days of the confirmation process.

During that week, here is the information NBC News hid from the public and those senators deciding on whether or not to confirm Kavanaugh:

Nothing was stopping NBC from reporting the above facts as they came in. There was no valid reason for NBC to withhold this relevant and crucial information, either from the public or from those senators still deciding Kavanaugh’s fate.

What’s more, had NBC released this story as it broke, NBC would have owned a major scoop, a story of national consequence. Instead, NBC chose not to reveal the truth until October 26, more than three weeks after it mattered.

The only plausible explanation for this is partisanship. NBC did not want Kavanaugh confirmed, so the truth was withheld and the public misled, even as — and this is important — NBC chose to spread a number of uncorroborated smears and hoaxes against Kavanaugh (which I will detail below).

Here is Snow’s explanation in full, a collection of her tweets, which I have numbered for clarity:

There is no ethical or editorial standard that stopped NBC from telling the public what it knew up until then. Avenatti “conferenced” NBC with a woman who was “inconsistent” with her sworn statement. That, right there, is a massive and valid story, and…

NBC covered up this explosive story, and there is no explanation other than a partisan desire to protect Avenatti and Swetnick and their campaign to destroy Kavanaugh.

In the above tweet, Snow wants us to believe that by the time she spoke to this second witness on October 3, the “confirmation process was over” and therefore the fact that this second witness had not only recanted her sworn statement but also claimed that Avenatti had fabricated it, had “limited news value.”

In the days between October 3 and October 6, the confirmation process was still very much in process, not only in the court of public opinion, but in the backrooms and minds of undecided senators.

This was the biggest story in the world.

Another lie, which I will explain in detail below.

Even though Avenatti is a mainstay in the news cycle as a potential 2020 presidential candidate; even though MSNBC had him on the air on October 20, and even though NBC and MSNBC found Avenatti’s attacks on Trump plenty “newsworthy” on October 16.

To fully grasp just how deceptive and dishonest Snow and NBC are, here is the most important thing to keep in mind…

None of the so-called editorial standards — that Snow falsely claims kept her from airing the facts that would have cleared Kavanaugh — stopped NBC from publishing and airing uncorroborated gang rape allegations against Kavanaugh.

NBC admits it could not corroborate Swetnick’s gang rape story. Nevertheless, NBC still ran with it and did so relentlessly (a search of NBC News came up with nearly 100 “Julie Swetnick” hits prior to October 6).

NBC fully embraced a gang rape story it could not verify or corroborate, even to the point where Swetnick and her unverified and uncorroborated smears enjoyed a big, splashy primetime interview on MSNBC — an interview granted even after NBC News knew Swetnick’s corroborating witness was anything but.

Somehow, it actually gets worse…

Swetnick’s gang rape claim was not the only uncorroborated allegation NBC ran against Kavanaugh.

On September 26, NBC violated every editorial standard known to man to run with this disgusting smear — that was later exposed as a hoax.

While Kavanaugh was fighting for his life, NBC was happy to violate editorial standards as a means to pile on with one uncorroborated allegation after another — all too happy to try and personally destroy him.

But when it came to legitimate news, legitimate evidence that would have cleared him, NBC covered that information up and is now hiding behind lies to pretend that was the moral thing to do.