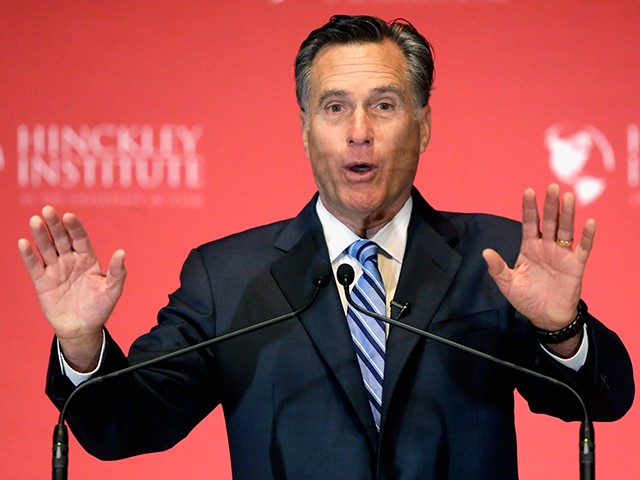 Almost 48 hours after Rashida Tlaib (D-MI) called President Trump a “motherfucker,” and some ten hours after Breitbart News pointed out that The Conscience of America had said nothing about it, Sen. Mitt Romney (R-UT), finally found it within himself to condemn this vulgar attack on the president of the United States.

Through his verified Twitter account, Wellborn Willard fired off this pathetic little missive, and did so late on a Friday night, almost as though he wanted to get himself on the record, but without anyone noticing.

“Rep. Tlaib took the politics of Washington deeper down the drain,” he wrote. “Elected leaders should elevate, not degrade, our public discourse.”

Rep. Tlaib took the politics of Washington deeper down the drain. Elected leaders should elevate, not degrade, our public discourse.

Whoa, there, Moral Mitt… slow down… What could you possibly have left in the quiver after throwing that kind of thunder and lightning?

How odd, though, that Righteous Romney said nothing for two whole days.

After all, Mannerly Mitt’s first official act as an incoming U.S. senator was to publicly condemn President Trump on nothing less than the pages of the far-left Washington Post.

But it was in that same condemnation where Worthy Willard reassured a troubled nation he would “speak out against significant statements or actions that are divisive, racist, sexist, anti-immigrant, dishonest or destructive to democratic institutions.”

And yet, it took him two days to compose that tweet? Two whole days to figure out that the unprecedented act of a congresswoman publicly calling the president of these here United States a “motherfucker” was worthy of condemnation?

Which reminds me… When will Romney condemn Rep. Hank Johnson (D-GA) comparing Trump to Hitler? It has already been five days and I think I speak for all Americans when I say we are waiting for some for his moral leadership on this.

Or could it be that Romney’s fiercest critics are correct… That he’s a fraud, a clown, a stooge, a Vichy Republican, a slithering, self-righteous narcissist desperate to win the love of his own abusers in the media, and that this is the path he has taken in the hopes that someday he can spectacularly fail at running for president a third time?

After all, what does it say about a man who eagerly attacks the leader of his own party in the Washington Post and then gives the violence-loving anti-Trumpers at CNN the “exclusive” interview after?

What does it say about a back-stabbing, sore loser who spreads his peacock feathers in front of the whole nation to smear Trump and then squeaks out a puny tweet to condemn a Democrat lawmaker who says such a thing, not just about the leader of the Republican Party, but of the American president?

And where is the junior senator from Utah now? At this very moment? As Democrat leaders like Rep. Alexandria Ocasio-Cortez (D-NY) are defending and normalizing this behavior?

And where is Mitt’s public condemnation of his pals at the Washington Post for publishing an argument in favor of calling the president a “motherfucker?”

Oh, my, can you imagine Mitt Romney condemning the Washington Post?  Can you imagine him on the Sunday shows berating the Post for “damaging the American discourse?”

Yeah, neither can I, because calling out the establishment media for its moral degeneracy requires actual courage, Trumpian courage, and Willard wouldn’t summon that kind of courage, even if someone offered him a gold-plated car elevator to do it with.