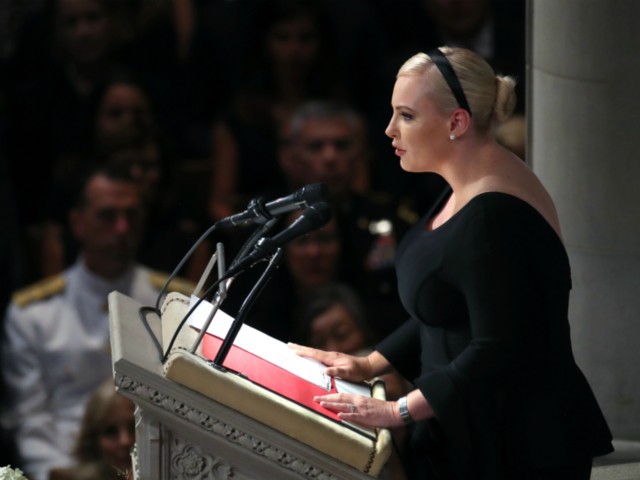 On June 16, 2015, Trump announced he was running for president, and within two weeks, McCain was smearing Trump as racist. “I just disagree with his comments about the, quote, Mexicans,” he said at a June 30 town hall event.

Trump said nothing in reply.

Ten days later, McCain again smeared Trump as a racist, and this time did so on, of all places, MSNBC.

“I just think that it is offensive to not only Hispanic citizenry, but other citizenry, but he’s entitled to say what he wants to say,” McCain told the far-left news outlet on July 11. “But I guarantee you the overwhelming majority [in Arizona] … do not agree with his attitude, that he has displayed, toward our Hispanic citizens. We love them.”

McCain, of course, is referring to Trump’s announcement speech where the future president referred to the type of people the Mexican government is looking to be rid of through that country’s cynical border policy.

“When Mexico sends its people, they’re not sending their best. They’re sending people that have lots of problems, and they’re bringing those problems with us,” Trump explained. “They’re bringing drugs. They’re bringing crime. They’re rapists. And some, I assume, are good people.”

Trump was specifically talking about who the Mexican government was looking to be rid of, not the Mexican people or Mexican illegal aliens in general.

But by pretending otherwise, McCain was joining the media by deliberately taking Trump out of context, and on July 11, the day after McCain’s MSNBC appearance, Trump finally hit back.

“We have incompetent politicians, not only the president,” Trump told thousands of his supporters at a rally in Phoenix. “I mean, right here, in your own state, you have John McCain. I’ve supported John McCain, but he’s very weak on immigration… If the right person runs against John McCain, he will lose.”

Pretty tepid stuff from Trump, especially in light of McCain’s dishonest determination to smear him as a racist.

Five days later, on July 16, McCain hit back, this time in the far-left New Yorker,  and again he crossed the line by referring to Trump’s supporters as “crazies.”

“This performance with our friend out in Phoenix is very hurtful to me,” McCain said. “Because what he did was he fired up the crazies… Now he galvanized them. He’s really got them activated.”

To recap: At this point, McCain has attacked Trump’s supporters as dangerous racists and smeared Trump as a racist, and did so by deliberately taking him out of context.

It was only at this point that Trump did what Trump does — went for the throat. In a July 16 tweet, Trump demanded an apology from McCain for the “crazies” remark, and in a follow-up tweet wrote, “McCain should be defeated in the primaries. Graduated last in his class at Annapolis–dummy!”

Two days later Trump went for the full ballbreak with his well-publicized remarks referring to McCain’s service record. Trump said, “He’s not a war hero. He was a war hero because he was captured. I like people who weren’t captured.”

But the myth fabricated by the establishment media is that Trump started all of this, or at the very least, that it was Trump who first removed the gloves. That myth is a lie, a shameless lie that refused to die even after what happened next.

At this point, Trump laid off McCain even as the famous grudge-holder continued to rip Trump as sexist and anti-Muslim. And while McCain offered his grudging support for Trump after the billionaire clinched the GOP nomination, McCain made a big deal out of refusing the attend the nominating convention.

Still, Trump attempted to make peace with his tormentor in May of 2016.

“You know, frankly, I like John McCain, and John McCain is a hero. Also heroes are people that are, you know, whether they get caught or don’t get caught, they’re all heroes as far as I’m concerned. And that’s the way it should be,” Trump told radio host Don Imus.

What’s more, Trump endorsed McCain’s 2016 re-election with these gracious words: “I hold in the highest esteem Sen. John McCain for his service to our country in uniform and in public office. And I fully support and endorse his reelection.”

McCain, however, kept grinding away in the most underhanded of ways. Sometime during the campaign, McCain played a key role in furthering the Russian collusion hoax.

Then, on October 8, McCain revoked his support for Trump after the Access Hollywood tape hit the airwaves.

Worse still, after Trump won the presidency, in July of 2017, McCain forced the entire country to stew in his bitterness when he betrayed a longstanding oath made to his country by voting against the repeal of Obamacare. “Let’s see Donald make America great now,”  he reportedly told Senate Minority Leader Chuck Schumer (D-NY).

Even as the brain cancer began to steal away his life, McCain lashed out at Trump by refusing to invite the sitting president to the funeral.

Nevertheless, despite all of this, Jared Kushner and Ivanka Trump still graciously accepted an invitation to attend John McCain’s funeral.

What’s more, this graciousness continued after the funeral, even after the hideous McCain family turned the nationally televised event into a pathetic anti-Trump rally, into a national obscenity.

The above context is crucial if you are to understand just what a petty, vain, vicious, and cruel person Meghan McCain is.

Plopped on Stephen Colbert’s couch Thursday night, Monstrous Meg sucked up to the left-wing comedian by publicly trashing Jared and Ivanka for graciously accepting that invitation. She even tried to make it sound as though they had crashed the funeral without an invitation, when we all know no one was there without a family invitation.

Monstrous Meg added that she hoped her opportunistic anti-Trump eulogy made the couple “uncomfortable.”

“I didn’t actually think about who would be attending the funeral, strangely,” McCain said unconvincingly. “The answer is no, I did not know [Jared and Ivanka] would be attending his funeral. … I thought that my family had made it clear, or at least I had, that the Trumps are unwelcome around me… So I was surprised when they were there.”

But in her defense, is this really Monstrous Meg’s fault?

What are we to expect from a spoiled dilettante raised by a hateful man who would rather stick it to his own country than honor his longstanding promise to repeal Obamacare? What are we to expect from an entitled princess raised by a woman who racially profiles interracial families, reports them to the authorities, and then publicly lies about them engaging in human trafficking because her life is so empty she needs to feel like a hero for ten minutes on a local radio show?

Yes, Meghan McCain is a terrible person, but she never really had a chance.