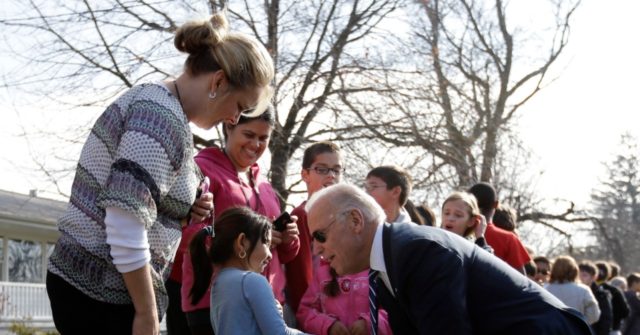 Before we get down to it, I want you to imagine the reaction from CNN or the Washington Post or Joe Scarborough’s latest wife or Whoopi Goldberg if there was even one video … not countless, like we have of Joe Biden: Serial Young Girl-Toucher … but just one video of Clarence Thomas or Brett Kavanaugh doing…

Does anyone believe that just one video like that would not have resulted in Thomas and Kavanaugh not only being disqualified from serving on the Supreme Court, but also being labeled a sleazy sex predator for life?

Does anyone believe Trump would be president with all those videos circulating around out there?

Hey, I’m not claiming Biden is a sexual predator, but come on… If you are not a powerful Democrat protected by the media, I dare you to try slithering up behind a co-worker to sniff her hair and plant a kiss.

You can’t do that.

When was that kind of behavior ever okay?

I’m nearing a hundred years-old, and I can tell you it never was.

But if you’re Joe Biden, if you’re Barack Obama’s former wingman, if you’re “in,” if our corrupt and sullied Elite Establishment likes you… then it is okay, even after two women have come forward to say it wasn’t  even 28 years after Anita Hill definitely made it not okay.

But, you see, Joe’s serial young girl-touching gets a pass because Joe polls best against Trump. And that is the only value the Elite Establishment holds: that is their warped idea of integrity.

So here they are, folks, our moral superiors, our betters, our guiding light towards all that is good and decent in America, our tastemakers and kingmakers… Two women have already accused Joe of touching them inappropriately, but that’s okay because Orange Bad Man.

“Joe Biden is a longtime American political figure who came from the fleshy world of sixties and seventies politics when everybody started to hug and kiss … we’re hugging. We’re kissing, all that stuff is going on.”

Name one other American politician from Biden’s generation who behaves this way. I’m not talking about accusations like those against Trump, a man who had never been accused of any wrongdoing until he ran for president.

Peggy, show me one — ONE — politician from the “fleshy” era that behaves this way. One.

What an idiotic thing to say.

“I don’t want Joe to stop doing that.”

It doesn’t matter what YOU want, Rape-Rape, what matters is what the women involved want, and how many women want a man who is not their husband to slither up behind them, caress their shoulders, take a whiff, and plant a wet one?

If someone did that to my wife, I’d knock them on their ass, and if I did that to someone, my wife would knock me on my ass.

Joe Biden is one of the truly decent and compassionate men in all of American politics. He has helped me through my fathers diagnosis, treatment and ultimate passing more than anyone of my fathers friends combined. I wish there was more empathy from our politicians not less.

Oh, so now when you’re polling the strongest against the Orange Bad Man, touching a woman inappropriately is “empathy.”

When I started covering politics I was struck by how often politicians made physical contact with voters and journalists. It wasn’t about sex. It was about connection. Joe Biden, who emerged in that era, is one of the finest people I’ve ever covered.

And at the far-left New York Times, when you touch a woman inappropriately while polling the strongest against Trump, it’s called “a connection.”

And if Biden kills your dog, it’s “pest removal.”

And if Biden steals your car, he’s taking over the payments.

God, I hate these people.

Could I just say this for what it’s worth about Joe Biden? I’ve never been close to Biden, but am struck by how many stories I’ve heard over the years of instances of his kindness and compassion, and from people who had no particular political motive at the time for telling them.

I have worked closely with @JoeBiden for many years. In my experience, he is warm and affectionate with women (and men). But never have I found his actions inappropriate or uncomfortable. I have always appreciated his kindness and warmth. 2/3

Hate to break this to you, cupcake, but you are not exactly the American Barometer for what’s okay,

“I don’t like this entire discussion around Joe Biden … it was not sexual harassment … we are cheapening the #MeToo movement … his unwelcome affection.”

Unwelcome affection like, say, “grabbing them by the pussy?”

TRANSLATION: “Look at Joe’s poll numbers! For the love of all that is holy, look! The Orange Man is bad — so very, very bad… What’s a few victims when the Orange Man is Bad?!? We protected Bill Clinton. We can do this again! God, I love pudding.”

You gotta give Joe Scarborough’s latest wife credit for honesty.

That’s the fer-real headline of a straight news story at the Washington Post.

One question… When does Joe’s affectionate, physical style with children come under scrutiny?

Hey, I’m willing to wait for that scrutiny to come by way of campaign ads during the general election…