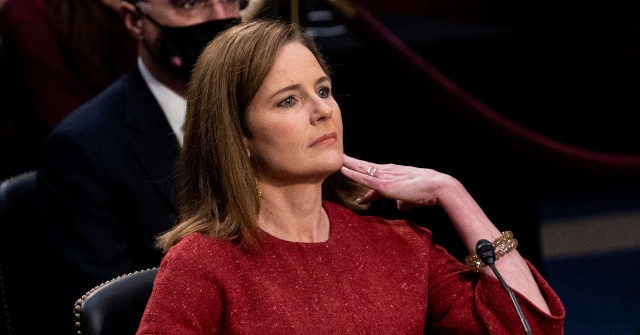 A majority of 51 percent want to see Amy Coney Barrett on the Supreme Court, and only 46 percent do not want her seated, according to a Gallup poll.

Other than Sonia Sotomayor in 2009, Barrett’s 51 “in favor” rating is higher than anyone since John Roberts in 2009. Merrick Garland hit 52 percent, but he never went though the confirmation process. He was more of a political token than a reality.

Here are the others…

So not only is Barrett polling over 50 percent and polling better than most of the nominees over the past two decades, she has managed to do this strikingly well in the face of a media smear campaign that goes back years.

What a media fail!

Keep in mind that the media smear campaign against Barrett as some sort of freaky, wild-eyed Catholic nut-job who would outlaw birth control, abortion, sex before marriage, dancing, and card playing, didn’t begin with her 2020 nomination. You can go back to the Kavanaugh and Gorsuch nominations and see the media dragging her through the mud as a Christian-tard every time her name was brought up as a Supreme Court possibility, as being on President Donald Trump’s shortlist.

What you had there was the media working to ensure she would never be nominated. This woman has terrified leftists for years.

Regardless, what we have here is a massive failure on the part of the media to damage this accomplished woman.

They couldn’t damage her despite the fact her judicial philosophy appears to be quite different from the woman she’s replacing, feminist heroine Ruth Bader Ginsburg. I should add that Ginsburg’s approval rating was only 53 percent.

They couldn’t damage her despite the fact the media have been lying to the public about how a Supreme Court nomination this late in a presidential term is unprecedented (it’s not).

Despite all this, Barrett has prevailed, and barring something insane happening — which is always a possibility with these crazed Democrats and their confederates in the corrupt media, she is going to be confirmed.

It’s worth noting her “not in favor” rating of 46 percent is historically high, higher than the previous record holder, Kavanaugh’s 37 percent, but the only number that matters in politics is any number over 50 percent.

The biggest mistake the media made was in attacking Barrett as something she obviously is not: some kind of loopy, wild-eyed zealot.

You even had liars in the Washington Post telling us she would make the Handmaid’s Tale a reality.

The woman who presented herself before the U.S. Senate Judiciary Committee epitomized poise, intelligence, restraint, knowledge, and ability to think on her feet.

The media told us she was something she obviously isn’t, and false advertising almost always fails.