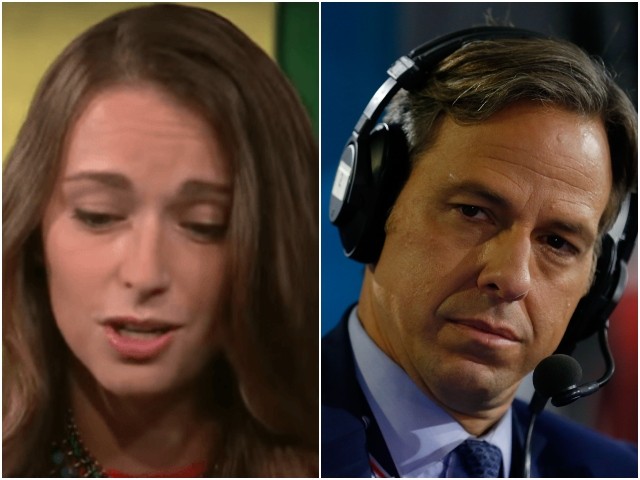 CNN’s Jake Tapper remained silent as the Atlantic’s Julia Ioffe compared President Trump and his supporters to ISIS, and then Tapper lied about why he remained silent.

Julia Ioffe is a monstrous woman, someone who epitomizes the establishment media’s moral and professional decline and downfall, someone who regularly violates every tenet of decency and truth, but whose media star continues to ascend for those very reasons.

In December of 2016, Ioffe accused President Trump of “fucking his daughter.” For this, she was rewarded with a dream job at the Atlantic and kept her other dream job at GQ.

Then, in June, for a GQ hit job, Ioffe asked Donald Trump Jr. if he wanted to have sex with his mother.

Then, in the wake of this weekend’s massacre committed by a Trump-hating terrorist at the Tree of Life synagogue in Pittsburgh, Ioffe blamed … the Jews, specifically those Jews who support Trump.

Monstrous, unethical, indefensible behavior, and yet she is still a welcome guest on CNN, specifically Jake Tapper’s basement-rated afternoon hour, The Lead.

During the Trump era, Tapper has himself devolved into something indecent. Over the years, we have watched him gin up violence in a predominantly black neighborhood, devote entire segments to mocking Trump’s penis, deliberately mislead his viewers with fake news, exaggerate his résumé, behave like an entitled child, and straight-up lie…

But it is through silence that Tapper has revealed his true indecency.

In February, the far-left Tapper moderated an anti-gun town hall. On top of a  number of hideous things he allowed to happen to those who disagree with him on Second Amendment civil rights, Tapper said nothing when his audience booed a rape victim. The rape victim’s sin? Purchasing a firearm so she could protect herself from the next rapist.

Tapper ‘s complicit silence as one of his guests attacked the motherhood of an NRA spokeswoman was one thing, but as his own audience booed a rape victim, a woman who was not even present to defend herself, Tapper said nothing.

On Monday, Jake Tapper’s indecent and complicit silence, as well as his dishonesty, returned once again for all to see.

I think, you know, this president, one of the things that he really launched his presidential run on is talking about Islamic radicalization, and this president has radicalized so many more people than ISIS ever did.

ISIS had, like 10,000 members. I think the president has far more supporters who espouse an equally hateful ideology.

What happened next is even more revealing. Remember this name: David Urban.

As Ioffe spewed these lies, this fake news, this obscene smear, CNN commentator Urban turned to Tapper: “For you not to push back on that is irresponsible,” Urban said. “That’s irresponsible. For her to say that the President of the United States has radicalized more people than ISIS is irresponsible.”

And then Tapper lied.

To defend his reprehensible and irresponsible silence, Tapper later said via Twitter, “As i explained live on air, I went right to @monacharenEPPC and @David JUrban to debate [Ioffe], and they were eager to do so. It’s a panel not an interview.”

“It’s a panel not an interview,” Tapper explained.

Remember when I asked you earlier to remember the name David Urban?

Well, how would you like to see Jake Tapper, Mr. This-Is-A-Panel-Not-An-Interview push back and “correct” David Urban during a panel and not an interview?

How would you like to see Mr. Standard, Mr. Ethic, Mr. Me-No-Hall-Monitor do to David Urban what he refused to do to a woman comparing Trump and his supporters to ISIS…?

Because here’s the video:

“Let’s look at [Trump’s] actions and not his words” — Really?! pic.twitter.com/xQydgmdAx5

No doubt, the Internet is full of other examples where Tapper’s partisan hypocrisy in how he moderates panels is on full display, but there he was in May treating his panel like an interview, playing hall monitor with David Urban; and here he is on Monday engaging in complicit and indecent silence when Trump and his supporters are smeared as terrorists.

It actually got worse…

Later in the show, Tapper allowed Ioffe to pretend to apologize, but all she did was use the opportunity to double down on her smear.

And the apology had nothing to do with Tapper coming to his senses, from his own sense of responsibility to present the truth to his viewers.

No, it was because the “Republican National Committee is jumping on your comments,” and he wanted to bail his monster out.

The media compare us to ISIS.

But don’t you dare call the media the enemy of the people.