According to various reports, His Fraudulency Joe Biden will stand before the United Nations today and lie to them about how—after four years of Orange Man Bad—America is back.

No one at the U.N. will believe it.

No one in America believes it.

Joe might believe it, but he also believes Ben Matlock is real and would make for a great attorney general.

Never in modern history has America been saddled with a president who so quickly and clearly failed, who so utterly destroyed everything he touched.

And it’s not as if Biden had crisis after crisis heaped upon him. Americans understand that terrible things sometimes happen and that the president doesn’t hold a magic wand. But that’s just not the case here. This isn’t 9/11 or the coronavirus or Iran seizing hostages. 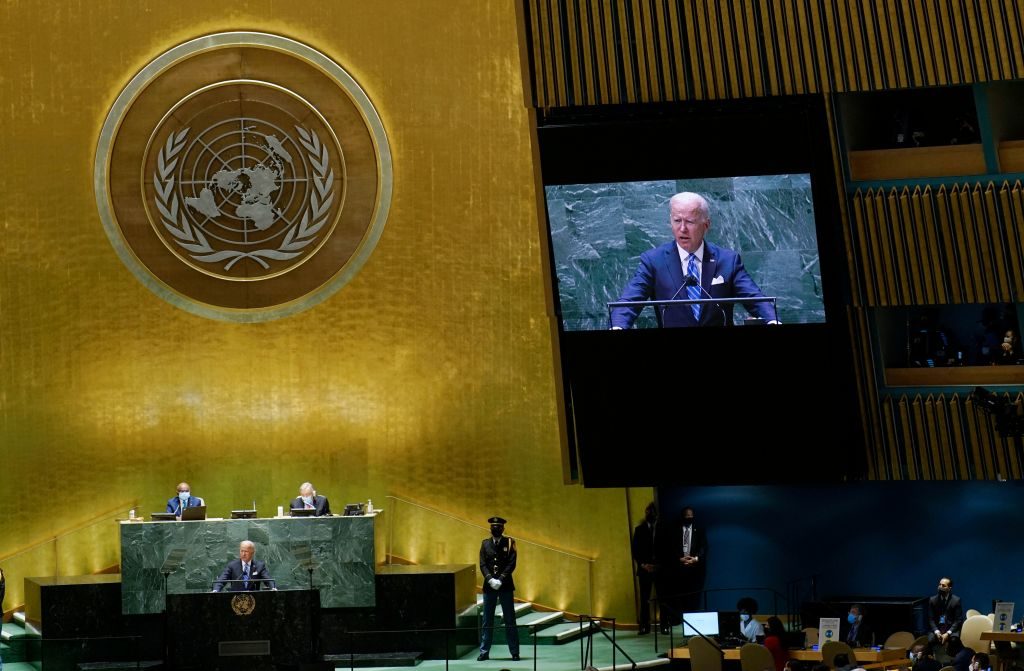 Everything is Slow Joe’s doing. Every crisis and failure directly results from Slow Joe’s awful judgment, his destructive policies, his declining mental acuity, and his lack of empathy for anyone not Joe.

After only nine months in office, things are so much worse than they were; it doesn’t feel real.

Let’s start with the basis of his presidential campaign, which was to manage the coronavirus crisis.

His Fraudulency strolled into office, and was handed a miracle vaccine from the Trump administration. So all Joe had to do was go out and sell a free miracle vaccine—and he couldn’t even do that.

For starters, during the 2020 campaign, he spent so much of his time telling people not to trust the “Trump Vaccine” that many of his voters, including a disproportionate number of black Americans, now don’t. And then, rather than extol the benefits of the vaccine and how it means a return to normal life, fully-vaccinated Joe still ran around in a mask.

Even now, even when the death and hospitalization rates are the best reasons to get vaccinated, he’s not selling those. Instead, he’s back to hiding behind a mask and doing everything possible to convince the unvaccinated (i.e., Trump voters) to remain unvaccinated with bullying and shaming campaigns.

The border disaster is, at this point, so awful as to be incomprehensible. If human rights activists actually cared about human rights, they’d be looking at all that squalid humanity living beneath a bridge today and longing from the good old days of “kids in cages.”

Biden is bullying and dehumanizing everyone who refuses to get vaccinated (Trump voters) and threatening them with fascist mandates, but at the same time, he’s refusing to vaccinate the tens of thousands of illegals he’s seeding throughout the country.

Here’s a riddle for you:

Why are international tourists required to be fully vaccinated but not illegal aliens?

Gee, could it be because tourists primarily visit deep blue cities while many illegals are sent out into the heartland among all those unvaccinated Trump supporters?

Biden’s epic mishandling of the coronavirus is creating a significant drag on the economy. Nothing damages the economy more than uncertainty and Biden’s insistence that the unvaccinated are a threat to the vaccinated, which means that the nearly 180 million Americans who are fully vaccinated cannot go about their normal lives, is not only almost entirely false, it killed the economic boom that was already mushrooming under Trump.

And then there’s Joe’s demented amount of government spending, which is creating record inflation, which, in turn, is eating up everyone’s wage gains.

After declaring he had reached a deal with his lunatic $3.5 trillion “infrastructure” bill, that premature boast is now smacking His Fraudulency right in the face like a dead fish.

As I write this, although Democrats control both the House and the Senate, and although a new president is almost always rewarded with the passage of his signature campaign pledge, infrastructure is looking like a non-starter.

Biden’s Afghanistan fiasco is one of the great unforced errors in all of American and world history. Thirteen American servicemen died—11 United States Marines, one soldier in the Army, and one Navy medic. Hundreds of Americans are still trapped behind Taliban lines and the situation becomes more hopeless and dangerous by the day.

Oh, and instead of ordering it all destroyed, Joe handed the Taliban tens of billions of dollars in operational U.S. war equipment.

The only war Biden’s won is the one he declared on afforable energy.

In search of a positive news cycle after Islamic terrorists killed 13 of our servicemen,  we were told a drone strike had killed 13 terrorists.

I don’t mind so much that the French are angry enough to remove their U.S. ambassador in protest, but we were assured the Trump Era of “chaos” and “amateurism”  and “alienating our allies” was over. We were told the grownups were back.

Regardless, you’ll never convince me this submarine situation could not have been handled better. For starters, maybe you don’t allow our oldest ally to find out they just lost a $66 billion contract only a few hours before it hits the news.

This is the first time in U.S. history France has recalled an ambassador.

The left’s lunatic embrace of defunding the police, undermining the police, unleashing the domestic terrorists in Black Lives Matter and Antifa, opening the prisons, and basically legalizing riots, has produced an explosion in crime rates unseen in decades.

Our president, this doddering old fool, told us we would all need booster vaccines in September — a lie that did more than anything else to undermine confidence in the vaccine. Turns out this was nothing close to accurate. The FDA “overwhelmingly rejected a plan Friday to give Pfizer COVID-19 booster shots across the board, and instead endorsed the extra vaccine dose only for those who are 65 or older or run a high risk of severe disease.”

Biden’s just running around mouthing off undermining the one thing that can bring back stability and normalcy: the vaccine.

After the Afghanistan debacle, our allies have no faith in Joe’s judgment or his word, not after he promised the withdrawal would not be a repeat of Saigon, not after he assured our allies he would not move unilaterally and then did, putting their people in harm’s way.

Domestically, our economy is hobbled by uncertainty and a White House incapable of selling a miracle vaccine.

Internationally we look weak and dishonest.

America is not back. America is sliding into recession and doing so in a world where Islamic terrorists are emboldened like never before.