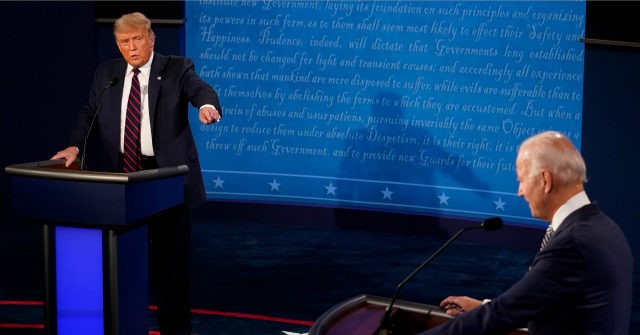 Two polls from Rasmussen are all good news for President Trump, who is surging, both in his overall job approval numbers and against Joe Biden.

The president currently holds a 52 percent job approval rating, compared to 48 percent who disapprove. This is Trump’s first lift above 50 in this poll since late last month, since his first debate with Biden and trip to Walter Reed Hospital with the coronavirus.

At this same time in the first term of his failed presidency, Barry Obama sat at 50 percent in this same poll. Obama was reelected, and right now, Trump is polling two points higher.

In a head-to-head matchup with Biden, Rasmussen’s weekly poll shows Trump surging. Biden is still up 49 to 46 percent, but at this same time last week, Biden was up a whopping 12 points. The week before that, he was up eight points. Rasmussen also points out that this is the “first time in a month that Biden’s support has fallen below 50%.”

This isn’t the only polling to show Trump on the move. Along with Rasmussen, the IBD/TIPP poll was one of the most accurate during the disastrous polling year that was 2016, and right now, that poll shows a five-point race when Biden had a nine-point lead on October 13.

A lot has changed over the past week. Despite frighteningly fascist moves by Big Tech and the corrupt national political media to bury the gob-smacking Biden Family corruption being uncovered by the documents found in what is looking more and more like Hunter Biden’s email cache, word is dribbling via New Media.

Trump also has his campaign mojo back big time and appears to be having a great time out on the trail. This is when he is at his most attractive, and the timing could not be better.

The bottom line is that this election is still a jump ball, and as of right now, things appear to be moving Trump’s way.