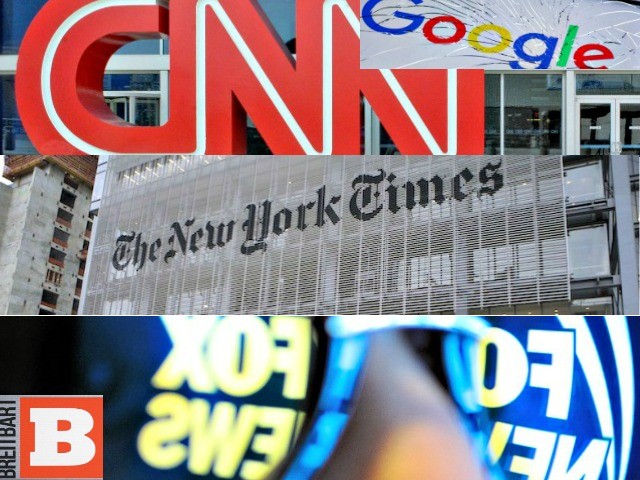 Although it feels as though every corner of the media has been politicized, there are still a whole lot of people who just want to know what’s going on in the world. These are people like myself (when I’m off the clock) who are news consumers, who want basic information.

Information is important, and therefore the thinking used to be that even if you had to sit through CNN’s hate-fueled activism, the New York Times’ phony sources, and the latest outrage Fox News has dug up to increase your blood pressure, it was worth it because in-between all the spectacle, actual news managed to creep in.

Unfortunately, we now know that is no longer true, we now know the era is over in which CNN, the New York Times, and even Fox News can argue they (at the very least) dutifully inform the public of everything.

We know this era of over because of the Google Tape.

To recap, the Google Tape reveals the following:

It is not far-fetched to compare that scenario to the stuff of spy thrillers, to dystopian movies, to every true journalist’s wet dream. What you have is proof, actual proof, of the worst kind of corporate malfeasance — a game-changing story, something of consequence.

Now imagine living in a world where the media you count on for information, where the news outlets you turn to as means to consume news, hide this video, cover it up, spin it, or pretend it does not exist.

Well, you do live in that world — because that is exactly what CNN, the New York Times, and Fox Business did with the Google Tape.

Basically, because these outlets are so driven by something other than informing the public, the Google Tape — the smoking guns of all smoking guns — was hidden from new consumers.

Get this… The far-left New York Times had the Google Tape all the way back in March, had all 60-plus minutes of it, had a massive story in their hot little hands; and not just any story, a legitimate game changer, proof — video proof — of the kind of corporate malfeasance that is hard to believe when you see it in fiction.

And what did the New York Times do with this bombshell? Well, the so-called “newspaper of record” covered it up, shielded Google, and deliberately misinformed the public into believing the only newsworthy thing that happened at a meeting of Google’s top executives two days after 2016 presidential election was a lot of grieving over Trump’s victory.

CNN is even worse. After Breitbart News broke the tech story of the year this week, the anti-Trump outlet refused to cover it, ignored it completely — at least until people started to notice CNN’s coverup and the last-place network was shamed into giving it a bit of play.

The motive behind CNN and the Times’ own acts of corporate malfeasance are not difficult to glean. As long as mega-corporations are corrupt for the “correct” reasons — to further the leftist cause, to remove Trump from office — CNN and the Times are happy to aid and abet that corruption.

And yes, that is what CNN and the Times have always been about, but news consumers need to take note, need to remember that both of those outlets are now so corrupt they have gone from spinning the news to hiding the news.

It is simply a fact that you can no longer trust CNN or the Times to keep you informed.

Which brings me to Fox Business and so-called “reporter” Adam Shapiro.

Shapiro’s coverage of the Google Tape this week was not only wildly misleading, he basically used the occasion to take a cheap shot at Breitbart News.

Breitbart presents 60-plus minutes of unedited video, video of a top-level executive meeting from beginning to end, and simply because Breitbart broke this story, and Shapiro warns viewers to take it with a “grain of salt.”

How do you take 60-plus unedited minutes of video with a grain of salt?

Wait, it gets worse…

Shapiro then proceeds to protect Google by covering the least newsworthy elements in the video (the post-election grief) while ignoring the bombshells about Google vowing to leverage its considerable corporate power to meddle in elections.

What motivated Fox Business to do that, to mislead its own customers? Professional jealousy? A desire on Shapiro’s part to keep his options open for a move to CNN?

You know what, who cares? It’s useless to speculate.

While I am in no way arguing Fox is equivalent to CNN and the New York Times, what I do know is that if you want to know what’s going on the world, for some indefensible reason, all three of these outlets are willing to withhold information from you.