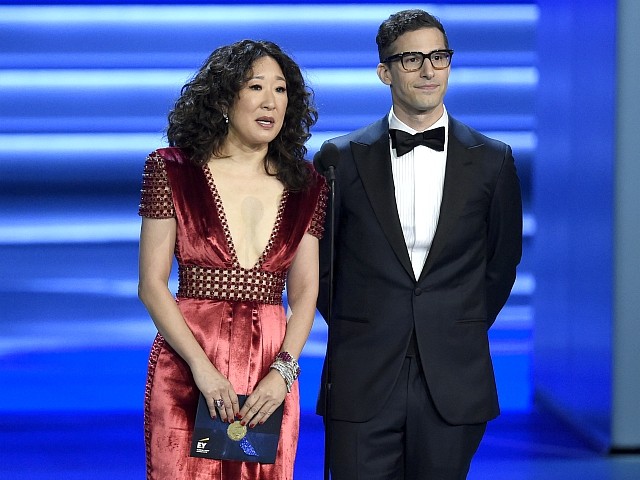 According to early estimates, Sunday night’s Golden Globe awards telecast is looking at a decade low in the ratings.

The far-left Deadline reports that last year’s Golden Globes hit a six-year low and, despite a lot of wishful thinking and a solid NFL lead-in, this year’s ratings came in a full five percent lower.

Following the six-year ratings low of last year’s Seth Meyers hosted Globes, NBC were looking for a win in the numbers. However, on a Sunday of little primetime competition on broadcast or cable and the big lead-in of that Philadelphia Eagles’ close win over the Chicago Bears, it looks like the Comcast-owned net were denied.

The 76th Golden Globes snared a 12.7/21in metered market results.

In the final ratings, the 2018 Globes hoisted a 5.0 rating among adults 18-49 and 19.0 million viewers, a double digit demo decline from 2017 and the worst the Hollywood Foreign Press Association event had done since 2012.

After two years of the Globes being hyper-politicized due to Hollywood’s near-fatal case of Trump Derangement Syndrome, this year’s ceremony was widely advertised as a non-political event.

In a desperate bid to rescue the ratings, co-hosts Sandra Oh and Andy Samberg promised to put an end to the divisive, alienating, and mean-spirited politics that have crashed, not just the Globes, but the ratings for every single awards over the last few years.

The problem with this promise, though, is that the American people have heard it before, only to be played for suckers after the actual show began. Hollywood is nothing else if not a proven gang of serial liars.

And such was the case last night, especially after Christian Bale called Dick Cheney an “asshole” and thanked Satan for giving him the inspiration to portray the former vice president.

There is really no way to spin this latest ratings dive, unless of course you compare it to the even worse dives other award shows have taken:

While shedding 4.5 percent of the prior year’s overnight rating is never a good thing, things could be worse. The latest Academy Awards (-16%), Grammys (-20%), Emmys (-10%), CMAs (-24%) and AMAs (-21%) were all down double digits from their respective previous installments.

Early numbers have NBC’s broadcast down less than 5 percent versus the 2018 awards.

The Golden Globe Awards declined a bit year to year, but not as much as other recent awards shows have.

Hollywood might have enjoyed record box office this year, but that was only thanks to mindless CGI extravaganzas that play like theme park rides. We want nothing to do with Hollywood’s serious movies or their obnoxious politics, or their neverending celebrations of self.

Awards shows used to be about star-gazing, the escapism found in the closest thing America has to royalty. No more. With rarer and rarer exceptions, rather than royalty, all we see now are thoughtless, ugly, marginally talented, entitled narcissists capable of drawing a crowd only when spandex and alien invasions help us forget who they really are.

We don’t hate Hollywood. We are hating Hollywood back. There’s a difference.