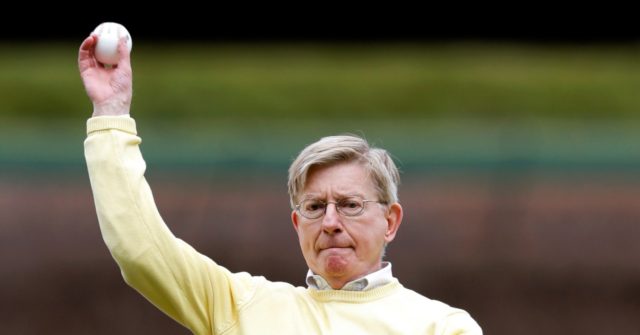 Never Trumper George Will accused the Republican Party of becoming a “cult” and described illegal immigration as an “entrepreneurial act.”

Will’s new home is where he belongs, on MSNBC, and in an effort to sell his latest book, he spewed this lie:

It has become a cult because of an absence of ideas. Because they have jettisoned the ideas for years, decades, all the 20th century almost. Conservatives said we’re for free trade. Trump said, ‘By the way, you’re not anymore.’ And they said, ‘OK, we’re not for free trade anymore.’ Or they pretend to be.

I’m sorry, George, could you repeat that; you lost me in the middle thing… Is the Cult of Trump a Party without ideas or a Party that has changed its mind and embraced different ideas, because you were not exactly clear there.

To claim the Trump GOP is a Party without ideas is just a bald-faced lie. You might not like the ideas, you might not approve of the ideas, but the following are ideas:

There is no shortage of ideas or even a vision coming from Trump. In fact, those ideas and vision are why he is president today. While Hillary Clinton was running around (when she could be pulled away from Murder She Wrote reruns and to actually go out and campaign) expressing outrage over Trump and his deplorables, Trump was running around laying out a vision for where he wanted to take the country. His was a campaign on ideas and few president have worked harder to keep those promises.

But Will wasn’t done there.

In a rather disgusting display of fealty to his new MSNBC Masters, Will pulled the leftist trick of conflating legal and illegal immigration as a means to attack Trump and his supporters as racist.

MSNBC’s Stephanie Ruhle: For years now, you have also been writing about immigration — for decades. In fact, we found a column that you wrote in 1993, saying this: “Fear touches the immigration issue at every turn … If immigration law is changed in a manner that codifies fear and hostility, America’s identity will be altered.”

George Will: It’s a good question, and I don’t know why. And I think it’s because we finally have a politician in the current President who is willing to be a serious demogogue about this. I do not understand for the life of me why conservatives do not recognize that immigration is an entrepreneurial act. These are people uprooting themselves and their families often, coming to a country where they have linguistic challenges, finding their way in and assimilating with remarkable speed.

Rather than ask his hostess to clarify if she was referring to illegal or legal immigration, George Cuck just plowed ahead and appeared to not only embrace the idea of illegal immigration, of open borders, but called this an “entrepreneurial act,” which is somehow dumber than Jeb Bush’s “act of love” moniker.

The people being hurt by all of these illegal entrepreneurial actors are those Will might describe as “those people,” the working class who are not big George Will fans, who don’t buy his books or vote in the way Mr. Cuck believes they should vote — so screw them, let’s replace them with a more compliant group of people who will work cheaper, increase corporate profits, and boost my stock portfolio.

Odd how Will ignored all the crime that come with illegal immigration, what it has done to the one-time paradise of Southern California, the $100 billion a year it costs taxpayers, the illegals who don’t work but come here for the free benefits and to clog up our public schools.

But to mention such things requires moral courage, and when you go the full cuck that is in short supply, while the fake news flows and flows…