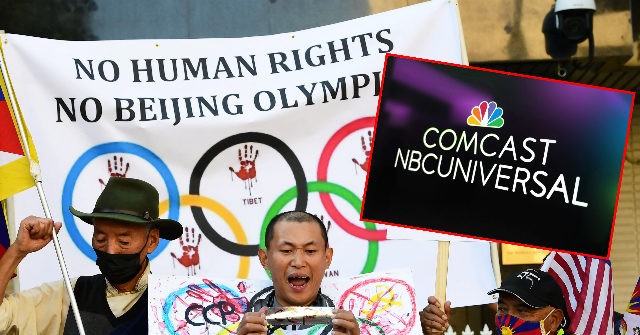 To put that 6.93 million number into perspective, 7.4 million tuned in to the cable TV show Yellowstone last November. That wasn’t even the season finale. That was the fourth episode of the fourth season.

That 6.93 million number is the smallest in the history of Olympic coverage. In fact, the Genocide Olympics currently hold eight of the ten smallest primetime audiences in Olympic history.

Last year’s Woke Olympics were considered an outright ratings catastrophe, but this winter’s Genocide Olympics are halving those numbers.

NBC must be losing its shirt.

As the Genocide Olympics move into their closing weekend, things are probably going to get a whole lot worse:

Heading into the final weekend of competition (traditionally the lowest-rated portion of any Olympics), the Beijing Games already accounts for the six smallest primetime Olympic audiences ever on U.S. broadcast television. Including last year’s delayed Tokyo Summer Olympics, 23 of the 25 smallest audiences have come in the past year — including the bottom 18.

The reasons for this collapse are glaringly obvious. On top of the off-putting woketardery that killed last year’s Summer Games, you have American corporations and news agencies openly propagandizing for the Nazis in China. It’s off-putting, anti-human, and un-American. No decent American wants to reward this despicable behavior with their time and energy.

Additionally, our love of the athletes is greatly diminished. Rather than stand as examples of excellence and hard work, too many present themselves as a bunch of spoiled, entitled crybabies who preen around as victims as they spew their own virtue to scold and shame the rest of us. This self-righteous, humorless narcissism is unprecedented in sports, and We the People can no longer admire or relate to these privileged crybullies.

Appeasing China’s open and defiant Nazism is even worse.

NBC’s quislings and NBC’s advertiser-quislings have made this wickedness possible and therefore deserve every bit of this financial pain and reputational damage.

Shame on these Nazi appeasers forever.