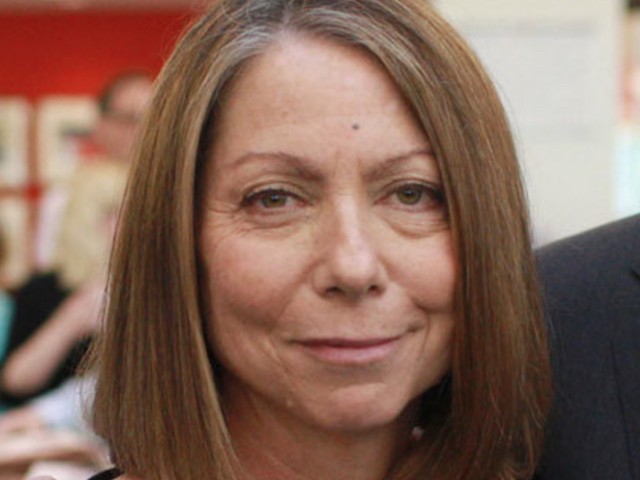 Abramson ran the far-left Times as executive editor from 2011 to 2014 and on Wednesday tweeted of the plagiarism allegations, “I take seriously the issues raised and will review the passages in question.”

Hopefully, during these troubled times, Abramson is finding some comfort from her Barack Obama doll, because from the looks of it, she’s going to need it. The allegations, dug up by Vice’s Michael Moynihan, are going to require an explanation of some kind:

So…Jill Abramson’s book has finally hit bookstore shelves. A few weeks ago, reading a galley copy, I noticed an egregious error about my colleague @adrs. She tweeted it out, a shit storm followed, Abramson corrected the mistake.

*All three* chapters on Vice were clotted with mistakes. Lots of them. The truth promised in Merchants of Truth was often not true. While trying to corroborate certain claims, I noticed that it also contained…plagiarized passages.

This passage, on former Vice News editor Jason Mojica, is lifted from a 2010 Time Out magazine piece, with small modifications: https://t.co/csNoONZQhX pic.twitter.com/aiQzwKEStl

This paragraph can be sourced to two places: a *masters thesis* and a 2013 New Yorker piece by Lizzie Widdicombe https://t.co/ZWX5RgKxlahttps://t.co/Ux6gdDO9Qg pic.twitter.com/tSIKyRoKDP

This paragraph can be sourced to two places: a *masters thesis* and a 2013 New Yorker piece by Lizzie Widdicombe https://t.co/ZWX5RgKxlahttps://t.co/Ux6gdDO9Qg pic.twitter.com/tSIKyRoKDP

During a Wednesday appearance on Fox News, Abramson had no explanation for the similarities.

“Do you have any comment on this?” Fox’s Martha MacCallum asked her.

“I really don’t,” Abramson said, adding, “Many people from Vice have been taking issue with the book it seems… I think they don’t like the portrayal of Vice.”

“All I can tell you is I certainly didn’t plagiarize in my book and there’s 70 pages of footnotes showing where I got the information,” she said.

But according to MacCallum, there are no footnotes in the passages cited by Moynihan.

THREAD: Jill Abramson plagiarized me at least seven times in her new book, Merchants of Truth.

“The whole situation is quite troubling, especially from someone who looked up to Jill and people like her as sort of the institutional leaders,” Frisch told the far-left Washington Post. “I came up with, and I still do read the New York Times every single day. To go through those passages and to see how similar they were to my own writing — for her to attribute a quote to Thomas as if he was speaking to her, when he was speaking, to me — it’s just very disheartening.”

Listen, everyone who makes a living as a scribbler, including yours truly, lives with the constant fear of accidentally taking credit for someone else’s material. Something as basic as forgetting to link your source or to indent a passage of someone else’s work can lead to all kinds of trouble and embarrassment, so Abramson deserves an opportunity to explain.

But if she does not have a good explanation, she is in real trouble. Abramson is no longer a member-in-good-standing within the elite media’s exclusive country club. CNN’s Fareed Zakaria, a shameless thief who plagiarized for years, survived what should have been a career-killing scandal, but only because the elite media covered everything up. Abramson is an outsider who made a ton of enemies before the Times fired her.

Regardless of Karma concerns, I don’t want to be too precious about this. Abramson is not denying Moynihan’s screenshot comparisons are real, which means something went horribly wrong …. in a book written by a woman who ran the New York Times.

Our elite media once again proves how dreadful it really is.