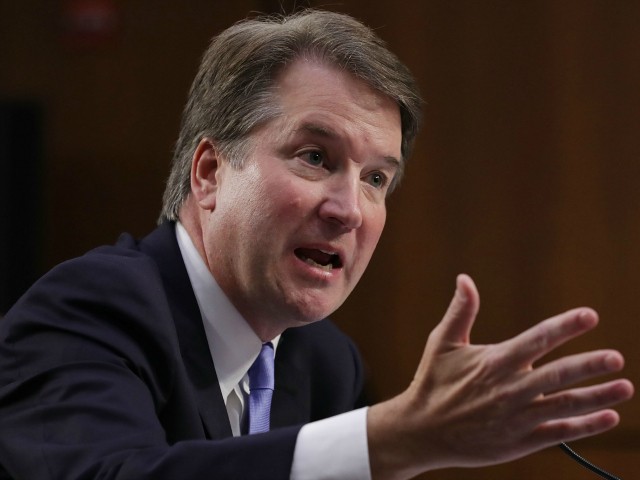 The two women making sexual misconduct allegations against Brett Kavanaugh claim to have witnesses, but so far, all of their witnesses back Kavanaugh’s claim that nothing happened.

It might be difficult to remember this as Democrats and the media throw around phrases like “second accuser” and “attempted sexual assault” and “exposing himself” against the Supreme Court nominee. But the facts are still the facts, and every single witness named so far by both accusers say they witnessed nothing of the sort.

The first accuser, Christine Blasey Ford, is accusing Kavanaugh of attempting to assault her at a house party in 1982 when she was 15 and he was 17. She named three people who were at the party: PJ Smyth, Mark Judge, and Leland Ingham Keyser.

By submitting their respective statements to the Senate Judiciary Committee, all three witnesses did so under penalty of imprisonment, and all three have zero recollection of the house party in question.

The one witness whom Ford said was in the room when the alleged misconduct took place (Mark Judge) denies it happened. Moreover, another witness, a lifelong friend of Ford’s, not only cannot remember the house party, she says she has never met Kavanaugh.

I understand that I have been identified by Dr. Christine Blasey Ford as the person she remembers as “PJ” who supposedly was present at the party she described in her statements to the Washington Post. I am issuing this statement today to make it clear to all involved that I have no knowledge of the party in question; nor do I have any knowledge of the allegations of improper conduct she has leveled against Brett Kavanaugh. Personally speaking, I have known Brett Kavanaugh since high school and I know him to be a person of great integrity, a great friend, and I have never witnessed any improper conduct by Brett Kavanaugh towards women.

Mark Judge said, “I have no memory of the alleged incident. Brett Kavanaugh and I were friends in high school but I do not recall the party described in Dr. Ford’s letter. More to the point, I never saw Brett act in the manner Ford describes.”

Leland Ingham Keyser stated, “Simply put, Ms. Keyser does not know Mr. Kavanaugh and she has no recollection of ever being at a party or gathering where he was present, with, or without, Dr. Ford.”

The above is an email that Keyser’s attorney, Howard Walsh, sent to the Judiciary Committee.

Furthermore, Keyser is the ex-wife of Democrat operative Bob Beckel and currently produces his podcast. According to public reports, she has only ever donated to Democrats. The far-left CNN reports that Keyser and Ford are “lifelong friends.”

For his own part, and under penalty of imprisonment, Kavanaugh not only denies any allegation that he acted improperly with Ford (or anyone), he denies being at this party — a party no one other than Ford remembers.

A second accuser came forward Sunday night in a piece the New Yorker’s Ronan Farrow co-authored. Deborah Ramirez alleges that an 18-year-old Kavanaugh exposed himself to her during a drunken 1983 dorm party at Yale.

By any standard, this story is a mess, including Ramirez’s own “recollection.” She admits she was drinking heavily at the party and that there are “significant gaps in her memory of the evening.”

When the New Yorker first contacted Ramirez, she said she could not say if it was Kavanaugh who exposed himself. But after “six days of carefully assessing her memories and consulting with her attorney, Ramirez said that she felt confident enough of her recollections to say that she remembers Kavanaugh had exposed himself at a drunken dormitory party.”

The New Yorker added that it “has not confirmed with other eyewitnesses that Kavanaugh was present at the party.”

In other words, like the Ford allegation, the New Yorker is not only unable to verify that Kavanaugh exposed himself, none of the witnesses can confirm Kavanaugh even attended the party.

The only so-called corroboration comes from an anonymous source who claims to have heard the story second hand. He says, “Another student told him about the incident either on the night of the party or in the next day or two.” Another former classmate remembers hearing something about this but has no recollection of who was involved.

But the witnesses Ramirez actually named say nothing happened:

One of the male classmates who Ramirez said egged on Kavanaugh denied any memory of the party. “I don’t think Brett would flash himself to Debbie, or anyone, for that matter,” he said. Asked why he thought Ramirez was making the allegation, he responded, “I have no idea.”

Witness 2: stated, “The other male classmate who Ramirez said was involved in the incident commented, ‘I have zero recollection.’”

In a statement, two of those male classmates who Ramirez alleged were involved in the incident, the wife of a third male student she said was involved, and three other classmates, Dino Ewing, Louisa Garry, and Dan Murphy, disputed Ramirez’s account of events: “We were the people closest to Brett Kavanaugh during his first year at Yale. He was a roommate to some of us, and we spent a great deal of time with him, including in the dorm where this incident allegedly took place. Some of us were also friends with Debbie Ramirez during and after her time at Yale. We can say with confidence that if the incident Debbie alleges ever occurred, we would have seen or heard about it—and we did not. The behavior she describes would be completely out of character for Brett. In addition, some of us knew Debbie long after Yale, and she never described this incident until Brett’s Supreme Court nomination was pending. Editors from the New Yorker contacted some of us because we are the people who would know the truth, and we told them that we never saw or heard about this.”

“This is a woman I was best friends with. We shared intimate details of our lives. And I was never told this story by her, or by anyone else. It never came up. I didn’t see it; I never heard of it happening.” She said she hadn’t spoken with Ramirez for about ten years, but that the two women had been close all through college, and Kavanaugh had remained part of what she called their “larger social circle.”

In a statement released Sunday, Kavanaugh called the Ramirez allegation a “smear, plain and simple,” and added (accurately), “People who knew me then know that this did not happen, and have said so.”

Once you separate the media sensationalism and the political posturing from the actual facts, what we have here is a remarkable situation where every witness named by Kavanaugh’s accusers … sides with Kavanaugh.