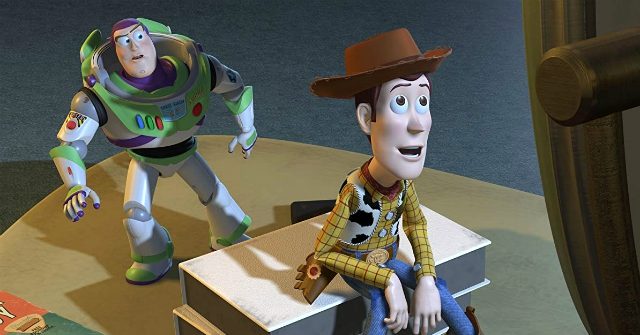 The far-left Walt Disney Company is now butchering its own classics to satisfy America’s Woke Fascists.

Although the company has not officially announced the burning of Toy Story 2, CBS News reports that the company chose to memory-hole a joke in the movie, a movie that is widely regarded as a masterpiece:

Disney quietly deleted a scene from “Toy Story 2” that appeared to joke about casting couch sex — a widely discussed topic when the #MeToo movement hit Hollywood. The change was made, with no announcement, to a new version of the 1999 hit that came out earlier this year.

The deleted scene came during a gag reel in the end credits, which shows blooper-style scenes involving the film’s animated characters. It depicts the character Stinky Pete the Prospector, voiced by Kelsey Grammer, flirting with two Barbie dolls.

“You know, I’m sure I could get you a part in ‘Toy Story 3,’” Stinky Pete says, as he strokes one of the Barbies’ hands. He then realizes he’s on camera and excuses the Barbies. “All right girls, lovely talking with you,” he says. “Yes, any time you’d like some tips on acting, I’d be glad to chat with you. All right, off you go, then.”

A perfectly harmless joke. What’s more, it’s a joke that treats shameful behavior as though it’s shameful, and still the un-American Orwellians at Disney censored themselves, blacklisted their own work, vandalized a classic piece of American art.

Sadly, this is not the first and will certainly not be the last time Disney chooses to appease the mob over protecting artistic integrity.

Disney has already removed Song of the South from distribution and, to appease the Clintons, buried the factual miniseries Path to 9/11.

If a casting couch joke is not safe, what is?

The answer to that question is… Nothing.

Nothing is safe and the saddest part of all is that this is self-censorship, corporate censorship, censorship at the hands of a handful of multi-national corporations that have seized the levers of artistic distribution and ownership, that have the legal authority to do whatever they want to countless classic film and television shows.

Speaking of television shows, The Simpsons bastardized itself earlier this year because a couple of grown men now claim they were molested by a Michael Jackson who cannot defend himself because he’s dead.

I fear that what we are seeing here is only the beginning of a purity crusade, a cleansing, a literal and figurative book burning that has already begun and has done so for exactly the reasons spelled out in Ray Bradbury’s Fahrenheit 451: [emphasis added]

“Now let’s take up the minorities in our civilization, shall we? Bigger the population, the more minorities. Don’t step on the toes of the dog-lovers, the cat-lovers, doctors, lawyers, merchants, chiefs, Mormons, Baptists, Unitarians, second-generation Chinese, Swedes, Italians, Germans, Texans, Brooklynites, Irishmen, people from Oregon or Mexico. The people in this book, this play, this TV serial are not meant to represent any actual painters, cartographers, mechanics anywhere. The bigger your market, Montag, the less you handle controversy, remember that! All the minor minor minorities with their navels to be kept clean. Authors, full of evil thoughts, lock up your typewriters. They did. Magazines became a nice blend of vanilla tapioca.  … It didn’t come from the Government down. There was no dictum, no declaration, no censorship, to start with, no! Technology, mass exploitation, and minority pressure carried the trick, thank God. Today, thanks to them, you can stay happy all the time, you are allowed to read comics, the good old confessions, or trade journals.”

“We must all be alike. Not everyone born free and equal, as the Constitution says, but everyone made equal. Each man the image of every other; then all are happy, for there are no mountains to make them cower, to judge themselves against. So! A book is a loaded gun in the house next door. Burn it. Take the shot from the weapon. Breach man’s mind. Who knows who might be the target of the well-read man? Me? I won’t stomach them for a minute.”

“Coloured people don’t like Little Black Sambo. Burn it. White people don’t feel good about Uncle Tom’s Cabin. Burn it. Someone’s written a book on tobacco and cancer of the lungs? The cigarette people are weeping? Burn the book. Serenity, Montag. Peace, Montag. … Give the people contests they win by remembering the words to more popular songs or the names of state capitals or how much corn Iowa grew last year. Cram them full of non-combustible data, chock them so damned full of ‘facts’ they feel stuffed, but absolutely ‘brilliant’ with information. Then they’ll feel they’re thinking, they’ll get a sense of motion without moving. And they’ll be happy, because facts of that sort don’t change. Don’t give them any slippery stuff like philosophy or sociology to tie things up with. That way lies melancholy.

And like the books in Fahrenheit 451, the original, un-vandalized copies of Song of the South, The Simpsons, Toy Story 2, Huckleberry Finn, and Path to 9/11 can only be grabbed up before they are burned.

And then we will have to whisper about, share, and pass them on in the hopes they will be remembered as they were before the Woke Firemen brought their conflagration.

Censoring art is as un-American as it gets.

It starts with Confederate statues, leads to George Washington’s birthday, the Betsy Ross flag, and Toy Story 2, and ends … well, it never ends.