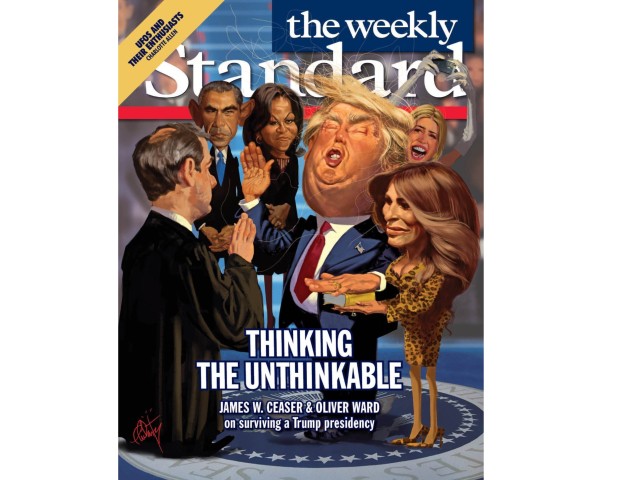 Depending on which report you read, the death of the Weekly Standard is either imminent or a tad less imminent. Either way, the anti-Trump publication founded by Bill Kristol and Fred Barnes in 1995 appears to be in desperate need of a rich savior, and any attempt to find one has thus far failed.

Has editor-in-chief Stephen Hayes reached out to George Soros or Tom Steyer? I’m not even joking.

Listen, no one enjoys the prospect of seeing anyone lose a job, so in the spirit of the season, I just want to say to the Weekly Standard staff that I am every bit as distraught over this as you would be if Breitbart News shut down.

Sarcasm aside, that is the Weekly Standard’s primary problem. In the age of Trump, the publication offers nothing we cannot get everywhere else in the elite media, nothing we cannot find at the far-left Washington Post, MSNBC, New York Times, CNN, etc.

Smug virtue-signaling and superior Trump-bashing are the cheapest commodities in today’s news business. They are literally everywhere. And so, instead of offering a unique voice and perspective in an ocean of left-wing media, the Weekly Standard instead chose to sit in the middle of this ocean and sell saltwater.

Even those in the establishment media lamenting the loss of the Weekly Standard are all spewing some variation of the same thing: “An important conservative voice opposing Trump.”

Sure, we all understand why the corrupt media found this “important voice” valuable: it allowed them to exploit the Weekly Standard and its contributors as a club against Trump from the right, and there is no species on earth the media find more useful than a narcissistic Republican bashing one of his own.

I don’t do boycotts, so I did not stop visiting the Weekly Standard for any other reason than I lost interest. The publication’s decision to sell out, to conform with the elite media, made it dull and wholly unnecessary.

And on top of all that tedious conformity, there was the sell-out factor.

Whether it was their banal stories or sanctimonious tweets, it seemed as though everything coming from the Weekly Standard  was manipulated in a way to earn an invite on Morning Joe or from Don Lemon; as a means to attract the Washington Post into hiring just one more disgraced neocon  willing to publicly renounce all his previous beliefs in exchange for a byline and a few bucks.

I don’t want to mislead anyone. This is not one of those “I loved you and you betrayed me” pieces. I’ll save that for David Letterman and National Review. For a time, though, there were a few writers over there I read regularly, but I was never a subscriber or anything.

No, the Weekly Standard as a whole only became interesting to watch as it fell into the establishment media’s classic trap, the old siren song of, Betray your base and we’ll love you…

And then your base abandons you, the music stops, and just like Megyn Kelly, you discover you’re the one without a chair.