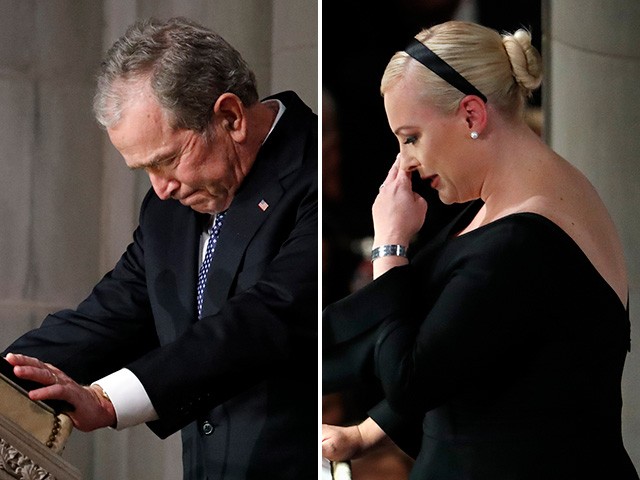 Whatever you might think of the Bush dynasty’s legacy, no one can ever accuse the family of not showing class and decency.

And their sterling example of this, while saying goodbye to their beloved patriarch, has also served as an important reminder of just how awful the McCain family is.

How could you forget?

The funeral lasted longer than the first season of Cop Rock — something like nine episodes.

McCain died on a Saturday, and his funeral services did not come to an end until the following Sunday, but only after it had toured three different cities. George H.W. Bush died on Friday and his services will end on Thursday. Both men were legitimate war heroes, but only one was a U.S. president.

Although illuminating, that is the least of it.

President Bush’s funeral has been lovely, classy, unifying, and loving. There have been no cheap snubs, no axe grinding from the grave.

The Bush family’s simple and decent act of burying the hatchet with President Trump, their patriotic act of making the president (and by extension his supporters) feel welcome and honored at these services, that is true patriotism, and that is what American democracy is supposed to be about.

What’s more, because of this, as sad as it all is, the funeral has been a healthy and uplifting national event, a rare time in these bitter days when all Americans have come together, an important reminder that, despite our differences, we do share a common culture and decency.

And it is also, by way of comparison, another reminder that the McCain funeral was something closer to an obscenity.

By far, the worst part of McCain’s going-away grudgefest was the clown show of audacious hypocrisy, the slathering sanctimony found in a theme that begged for us to go back to the good old days when people were civil with one another — and yet, all of this tripe about “civility” was coming from those who used a war hero’s funeral to snub and bash everyone who is not a member of their elitist establishment club — including, unforgivably, the president of the United States.

And then there were the so-called eulogies, most of which were reprehensible acts of narcissistic exploitation. On one hand, you had eulogies being used as score-settling tirades against Trump and his supporters, and on the other you had those like Meghan McCain — the deceased’s own child, for God’s sake — using her eulogy to up her media profile, to create a YouTube moment, to reassure the same hideous media that personally destroyed her father during his 2008 presidential run, that she is one of them.

“The America of John McCain does not need to be made great again, because it is already great,” the hideous Meghan said. I mean, she really said that — at a funeral — her father’s funeral.

Everything about McCain’s funeral proved just what a shallow, grasping, insecure, and small family this is. Among other things…

Choosing pallbearers to take a jab at Trump.

Funeral attendees applauding the mean-spirited partisanship as though they were at a rally.

John McCain’s funeral was twisted into something bitter and un-American, something disgraceful and petty. The New Yorker aptly described it as “the biggest resistance meeting yet.”‘

“Two ex-Presidents and one eloquent daughter teamed up to rebuke the pointedly uninvited Donald Trump, the New Yorker wrote, adding, “The funeral service for John Sidney McCain III, at the Washington National Cathedral …was all about a rebuke to the pointedly uninvited current President of the United States, which was exactly how McCain had planned it.”

What a disgrace, and every decent person knew at the time it was a disgrace. But through their act of common courtesy, humanity, dignity, and modesty, the Bush family once again reminded us of who they really are and who the McCains really are.

May God bless and keep President George H.W. Bush and his family.

And may God forgive John McCain and his.