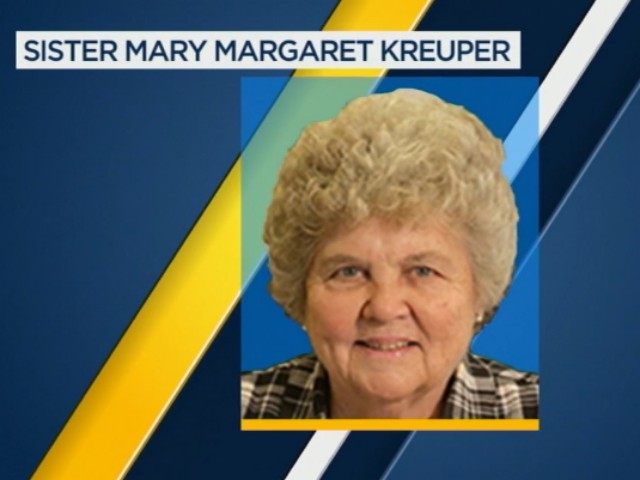 Is there any accountability in the Catholic Church? Rape a kid? No problem. Rape a whole bunch of kids? Whatevs. Cover up the raping of kids? Pish-posh. And now you can steal $500,000 from struggling schoolchildren and not face criminal charges.

The story goes like this: A recent audit shows that over the course of a decade, Sister Mary Margaret Kreuper and Sister Lana Chang embezzled a cool half-million dollars from St. James Catholic School in Torrance, California.

Kreuper was the K-8’s school’s principal, Chang was a teacher, both retired last year.

Apparently, the two “best friends,” used the money for lavish vacations that included gambling sprees at various Las Vegas casinos. To cover up their crimes, the nuns deposited monies donated to the school in a “long forgotten” bank account and lied to everyone who asked about a rich relative funding their travel.

According to the Press-Telegram, both women have confessed, but the archdiocese is refusing to press charges, because — get this — they have expressed remorse and their order, the Sisters of St. Joseph of Carondelet, imposed “severe sanctions” on them and agreed to pay the money back.

“Sister Mary Margaret and Sister Lana have expressed to me and asked that I convey to you, the deep remorse they each feel for their actions and ask for your forgiveness and prayers,” Monsignor Michael Meyers said in a letter sent to parents, reports Fox 6. “They and their order pray that you have not lost trust or faith in the educators and administrators of the school.”

Let me stop right there…

Don’t tell me that the Sisters of St. Joseph of Carondelet will pay it back. This order took a vow of poverty, which means any monies they raise would go to the Church anyway, so “paying it back” is just moving the money from one part of the Church to another.

There is no “paying it back.”

While gambling/embezzling nuns might sound like something out of a “cool” HBO movie, the reality is a little different. Like most Catholic schools, St. James is struggling, and these two women diverted tuition payments and donations from a struggling school into their own secret gambling account. What’s more, even if St. James was not struggling, the money could have helped any number of Catholic schools struggling in the Los Angeles area.

Here is another line of BS from the Church:

“No student or program at St. James has suffered any loss of educational resources, opportunities, or innovations,” Meyers claims.

Do you have any idea how hard some parents work to keep their kids out of failing public schools and in these private Catholic schools? If they cannot afford the tuition, or if there is not enough scholarship money — You know, because Sister Roulette and Sister Blackjack want to see Wayne Newton again — these parents work extra jobs, donate countless hours at the Church, or both. School donations are meant to help these parents and children, and these women stole $500,000 from those same funds.

So how in the world can the Church justify not pressing charges?

I’m not calling for Sister Gluttony and Sister Avarice to be ex-communicated, which, if you are Catholic, is worse than prison. Everyone deserves a second chance, everyone deserves forgiveness. But there must first be punishment, accountability. A debt must be paid to society, a message must be sent to others in the Church that this will not be tolerated.

The message the Church sends by refusing to press charges is not one of forgiveness, but of an inexcusable lack accountability.

Who is going to donate money to an organization that allows such a thing to happen? This tells every parishioner that if you donate and someone steals it, as long as that someone is in The Club, there will be no consequences.

And if someone in The Club doesn’t steal your donation for a Vegas, Baby weekend, your donation will probably be used to buy the silence of Church’s latest under-age rape victim.

We got a pope more concerned with trees than souls running a Church that looks the other way at the worst crimes imaginable.