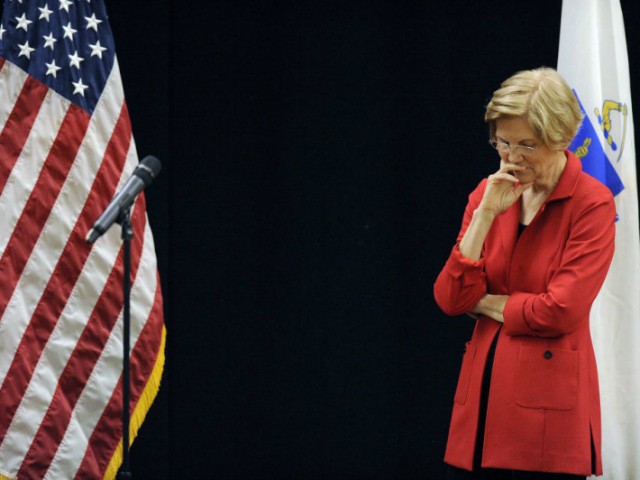 The far-left Boston Globe has turned against Sen. Elizabeth Warren (D-MA) and is now urging her not to run for president.

This comes just one day after the New York Times finally had to admit that the controversy over Warren’s decades-long lies about her Cherokee heritage has damaged her presidential chances.

In an editorial published Thursday, the Globe said Warren “missed her moment in 2016, and there’s reason to be skeptical of her prospective candidacy in 2020.”

The Globe then pointed to numbers from Warren’s re-election to the U.S. Senate last month, which they believe “suggests there’s a ceiling on her popularity” because the Republican governor “garnered more votes than she did in a state that is supposed to be a Democratic haven.”

This is a stunning turn of events for the embattled senator, especially coming from the Boston Globe, which is not only her hometown newspaper, but the outlet that has done more than any other to prostitute itself in the cause of making Warren president.

Although Warren has spent decades lying about her American Indian heritage, although her recent DNA test only proved she was lying, it has been the Globe making a fool of itself flying air cover for her, even after they flubbed the basics — like math.

But here now is the Globe throwing in the towel on Warren… What a turn of events.

Of course, the Globe editorial fails to mention the real reason Warren will never be president, which has absolutely nothing to do with a popularity ceiling. And in large part, because it aided and abetted her Cherokee delusion, the Globe is responsible for Warren’s epic crash and burn.

Rather than save her from herself when she brought them the DNA results that proved she has no more Native blood than the average white American, rather than warn her that this DNA test will turn her into a national punchline if she pretends the results vindicate her heritage claims, it was the Globe that went along, that attempted to use the DNA test to gaslight the country — which has been nothing less than a train wreck for Warren.

As I have mentioned previously, that DNA test could have been Warren’s escape hatch out of this years-long controversy. She should have used it to admit she was wrong to rely on family lore, apologize for being wrong, and move on… People would have respected that.

Instead, she chose to believe that her enablers at the Globe and the rest of the establishment media could pull off this con. But in the New Media era, this just isn’t possible anymore, and now Elizabeth Warren will never be president.