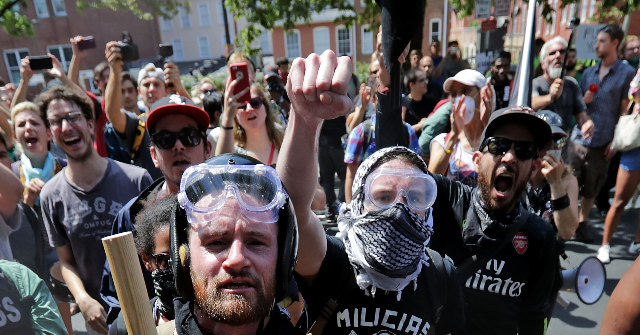 The far-left Associated Press (AP)  is deliberately encouraging more left-wing domestic terrorism by downplaying the unprecedented wave of terrorism that has hit countless Democrat-run cities over the past few months.

The domestic terrorists in Antifa and Black Lives Matter are responsible for murders, assaults, arson, looting, and the destruction of large areas of numerous downtowns. And the maniacs at the AP, who want more, are trying to convince us these terrorists are just like us.

The AP even goes so far as to encourage more terrorism by criticizing President Trump instead of the marauders responsible for the worst wave of violent riots in our country’s history. The article is titled — LOL — “AP finds most arrested in protests aren’t leftist radicals” and the following excerpts basically sum it up:

Very few of those charged appear to be affiliated with highly organized extremist groups, and many are young suburban adults from the very neighborhoods Trump vows to protect from the violence in his reelection push to win support from the suburbs.

Several of the defendants are not from the Democratic-led cities that Trump has likened to “war zones” but from the suburbs the Republican president has claimed to have “saved.” Of the 93 people arrested on federal criminal charges in Portland, 18 defendants are from out of state, the Justice Department said.

And on and on and on it goes with example after example of how “prosecutors have provided little evidence of any affiliations they have with organized extremist groups.”

Uhm, yeah, I’m pretty sure rioting with these groups is “affiliating” with them.

Nonetheless, the article has all kinds of space to pretend the drop in the ocean of right-leaning counter-protesters are a big problem.

And oddly enough, nowhere does the AP seem interested in talking about how surprisingly normal these drop in the bucket of “far-right extremists” are — you know, how they are just like us.

The reason I know the AP is looking to encourage more terrorism is 1) there is simply no question the national media overall turned a corner to where they now believe terrorism and violence are legitimate means to push the country left, and 2) this is yet another attempt by the far-left media to tell us our eyes are lying to us, that there is no real threat out there, that all the death and violence and burning of city blocks wasn’t all that bad.

That’s the plan here… To get Normal Americans to put their guard down and to signal to the terrorists that terrorism is okay. Hey, the media will always have your back. Don’t worry, what you did wasn’t wrong. We’re going to make it go away. We’re going to downplay it and make excuses for you. You’re a good person. You did the right thing. You are righteous. You should do it again. And again. And again. It’s the Trumptards we hate. Trust us, no matter what crimes you commit, no matter who you kill or who’s life you destroy, we’re going to make it about the Trumptards!

Let me explain how dishonest the AP is in this way…

I’ll bet you dollars to donuts that if you looked at the number of people arrested among those Tiki Torch racists in Charlottesville, I’ll bet if you dug into their background, you would find the exact same thing… A bunch of seemingly normal people with no formal ties to any extremist group.

You could probably do this exercise with any violent or offensive event.

Do not allow fake media outlets like the AP gaslight you.