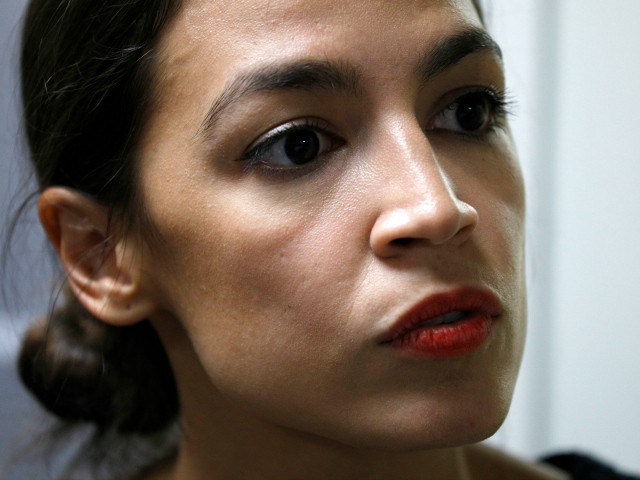 Rep.-elect Alexandria Ocasio-Cortez (D-NY) compared the migrant caravan members seeking to enter America illegally to Jews fleeing the Holocaust, which can only mean she is comparing Central America to Nazi Germany.

In a Sunday tweet, Ocasio-Cortez not only compared Central America to Nazi Germany; she compared it to “Rwanda” and “war-torn Syria.”

“And it isn’t for those fleeing violence in Central America,” she concluded.

At the beginning of the year, we were forced to sit through countless news cycles while our Commentariat Elite virtue signaled all over themselves to express their outrage over a second-hand rumor about President Trump declaring certain countries “shitholes.”

But here is America’s latest Socialist “It” Girl, the media’s favorite Mod Marxist, the Gaffe Gal, telling the world that what these migrants are fleeing from is comparable to some of the very worst human rights crises the world has ever seen.

According to various reports, these migrants are primarily fleeing Honduras, El Salvador, and Guatemala — are these countries evil? Has the government built an infrastructure dedicated to the murder of millions? Are there concentration camps? Are countless innocents — men, women, and children — being gassed, burned in industrial ovens, shot, and buried en masse?

While there is no question these countries have their problems, and some very serious ones, we know from the migrants themselves that almost all of them are hoping to enter America illegally for a “better life,” which means economic opportunity, which is a far, far cry from the Holocaust.

This is an outrageous slander committed by a high-profile Democrat and an incoming congresswoman, but because her Cause is to flood America with Illegal Democrats, the Elite Commentariat are willing to look the other way.