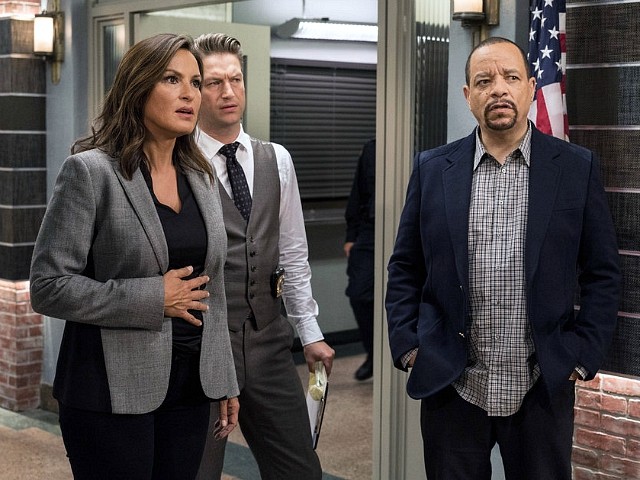 Someone at the far-left Washington Post believes television should respond to the death of George Floyd by banning cop shows.  That’s actually not a bad idea.

For the most part, I’ve given up on TV. No joke, the last broadcast television show I faithfully tuned into week after week was Seinfeld. That means I have not watched broadcast TV since 1998 — more than 20 years. The final cable TV show I tuned into weekly was HBO’s Sopranos, which ended its legendary run 13 years ago in 2007.

That doesn’t mean I’ve missed everything. Far from it. During 24’s run, my wife and I would buy the latest season on DVD and then binge on it over a weekend, starting on Friday night. Good memories.

Other water cooler shows — The Shield, Breaking Bad, The Wire, Mad Men, The Closer, Lost, etc. —  we binged (before binging was a thing) either by season or after the run was over entirely.

There’s a few reasons for this… I can’t stand commercials, I can’t stand waiting until next week to find out what happens next, and I really can’t stand modern-day television. My time is too precious to waste on formulaic, worship-the-government, left-wing drivel.

And that’s what dramatic network TV is these days… It’s all formulaic, worship-the-government, left-wing drivel. And the worst offenders are cop shows…

Some of you are going to get mad at me for repeating this, but the way television changed after 9/11, the way it turned into a blind cult of First Responder Worship, is not healthy for our society. Television, most especially broadcast television, is an authoritarian fairy tale filled with competent, compassionate, crusading government employees solving all of our problems.

Police officers. District attorneys. Firemen. Federal agents. The military. NCIS: Here and There. Law & Order: This and That,  Chicago: Up and Down. CSI: Everywhere. When it’s not those who earn their paychecks directly from the government coming to our rescue, it’s other crusading members of the stifling establishment: doctors, lawyers, teachers, scientists, and God help us all — superheroes fighting for the suffocating conformity of social justice.

Just because these shows portray law enforcement in a positive way, don’t be fooled into thinking these shows are conservative — unless your idea of “conservative” is hundreds of thousands of hours of propaganda reassuring the public government is good, government is competent, government will solve all your problems, you can depend on government.

And I do believe this blind hero worship everywhere on TV, this absurd view of law enforcement as Brave, Bold, and Benevolent Warriors, has contributed to an awful lot of bad policing. Racism is not a serious problem in America or in law enforcement. If you look at the videos where cops have gone too far over the past ten days, the bullying and brutality is colorblind. The problem is not White v. Black — the problem is Us v. Them, mixed with terrible training.

I’m convinced the over-militarization of police, this condescending mentality where too many (not all) law enforcement officers see themselves as superior, as overseers, as zoo keepers, as above the people they protect (as opposed to being one of us), as noble fighters in a Cold (and sometimes Hot) War against the unwashed, ignorant, selfish rabble  — that this, in large part, is due to TV, and comes from a left-wing entertainment community that preaches conformity, celebrates government authoritarianism, and despises everyday Americans.

What happened to the heroic individuals standing up for individualism?

What happened to those outside the system fighting the system, questioning the system; the One Man exposing the cruelty, pettiness, absurdities, negligence, and Kafka-esque tyranny of the bureaucracy? The One Woman mocking the incompetence, laziness, and smugness of bureaucrats? Where are the iconoclasts fighting a hopelessly corrupt system that demands uniformity, obedience, featly, and conformity?

Instead, what we get is formulaic, government do-gooderism conformity, and I find that both boring and disturbing.

Elites always point to the Eisenhower Years as the ultimate in conformity and use Leave It to Beaver as a lazy example, but network television has never been as sterile and pro-establishment as it is today. The fifties were filled with shows about iconoclasts, loners, and outsiders going there own way, bumping up against the system, filled with Men determined to be their Own Man, to not get gobbled up and torn apart by the soulless bureaucracy of government and social norms: Perry Mason, Josh Randall, Peter Gunn — countless private investigators and cowboys determined to live life on their own terms, to not get chewed up by the system.

Because network TV is so generic and subservient to authority today, and has been for two decades, this is one reason people like myself have eagerly embraced shows about sociopaths and gangsters… The Sopranos, The Shield, Breaking Bad, Better Call Saul, House of Cards (the early seasons that didn’t suck), or even The Americans seeking to destroy our way of life… At least they’re not Borgs with badges, Bureaucrats with rule books,  Civil Servants with slide rules and “expertise” come to tell us what’s best for us.

I’ll take a Walter White over a G-Man any day of the week.

Outside of great writing and acting, shows like The Sopranos and Breaking Bad offer up outsiders who have lifted a middle finger to the system and want no part of anyone else’s definition of What’s Best For You. You don’t have to agree with their life choices to appreciate a healthy, underlying theme of individualism — a theme that used to drive popular entertainment that we are now starved for. I would also argue that these shows are ultimately moral, but that’s a debate for another time.

Sure, there’s a middle ground between the sociopath Tony Soprano and the suffocating and insufferable, establishment-loving, social justice-crusader Olivia Benson. What we need are more Jim Rockfords (TVs greatest American), a hero who preaches live and let live, minds his own business, always demands his Constitutional rights, distrusts authority, rages against government abuse, ridicules busybodies, upbraids snooty bureaucrats, owns an unregistered firearm, eats meat, likes the ladies, and chooses life in a trailer over the McMansion that comes with selling out to corporate America.

Unfortunately, when a lost cause like the Washington Post calls for a ban on cop shows, that does not mean they want more Jim Rockfords. What they want is a transgender Olivia Benson solving all our problems as a social worker instead of a cop, as a do-gooder busybody preaching woke conformity.

There’s a lot of good TV out there, most of it from the 50s, 60s, and 70s… Just be sure to purchase the discs, because as I wrote in my Handy-Dandy Survival Guide to Life Under Social Justice Mob Rule, we’re about to enter a very dark blacklisting period where “problematic” TV shows, movies, and books will disappear just like all those “problematic” monuments and statues.