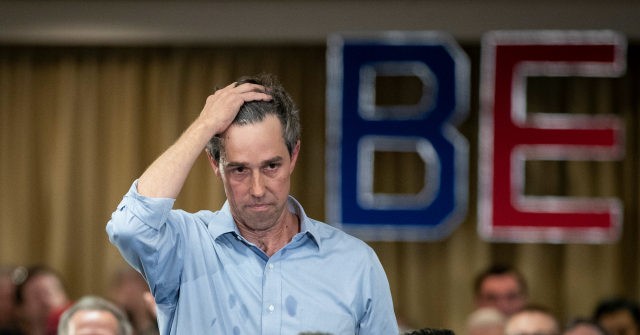 Fake Hispanic Beto O’Rourke’s presidential campaign is looking doornail dead … and let’s be honest: it never really took off. But after peaking nationally with 9.5 percent support in the Real Clear Politics poll of polls, he has now collapsed to just 3.2 percent support. And along the way, he dropped from third place (behind 275-year-old Bernie and 189-year-old Biden) to sixth.

If you recall, Paddy O’Rourke was once America’s wunderkind, the next John or Bobby, the phenom who could turn Texas blue, Mr. Charisma, the White Obama, the guy whose youth, energy, charm, and wokeness would make him The Great Trump Slayer who ushered in the next Progressive Era!

How did the Shamrock King get his Lucky Charms stolen?

Beto is a totally fabricated media sensation, and the reason the media fabricated that sensation was in the hopes of defeating Sen. Ted Cruz (R-TX), a Republican the media hate with enough fury to turn Beto the Dweeb into Beto the KoolKidFutureOfAmerica.

And to Beto and the media’s credit, they nearly defeated Cruz. That election was a lot closer than it should have been.

Without Cruz, the media lost interest in protecting and shaping Beto into something’s he’s not, and without the full force of the media pouring all of their propaganda powers into one man to make him Bobby Kennedy, all that’s left is Beto, and Beto is not all that impressive on his own.

I am running to serve you as the next president. The challenges we face are the greatest in living memory. No one person can meet them on their own. Only this country can do that, and only if we build a movement that includes all of us. Say you’re in: https://t.co/EKLdkVET2u pic.twitter.com/lainXyvG2n

And now look at this…

I rest my case.

Beto married an heiress like John F’n Kerry; he drives like Ted Kennedy (including his attempt to drunkenly flee the scene); he is as miserly as Joe Biden in his charitable giving; like Obama, he has no real experience but has a very high opinion of himself; and he is an Irishman posing as a Hispanic in the same way Elizabeth Warren posed as an American Indian.

On top of that, he was a hacker who stole other people’s credit card numbers.

This is one flawed leprechaun.

When you are running to be nominated for president by a political party obsessed with identity politics (because they have no ideas), being a straight, white guy is a major deficit — especially when you are up against two other straight, white males (Biden and Bernie) who already enjoy a sizable following.

On the identity politics front, the only thing Beto has going for him is that he’s a beta male, not at all masculine, but betas don’t win presidential elections.

If Beto the beta were smart, he would reboot his candidacy for a third time by announcing he is transitioning into a woman. This would not only shake up his campaign; we would all believe him.

The key to defeating someone is to define them before they can define you. Trump’s genius is his ability to do this with a nickname that sticks … and has the additional benefit of getting under that person’s skin because it’s true.

Trump never bothered to hit O’Rourke with a nickname, but once he ridiculed Beto’s flailing arm movements, everyone knew it was over.

You cannot win a presidential election if you are this easy to ridicule, and Beto is absurdly easy to mock.

Other than trying to appease the extreme left, I have no idea what Beto stands for, where he wants to take the country. All he does is run around, stand on the places where people eat their food, flail like a maniac, and spew platitudes…

He’s not a presidential candidate as much as he’s a middle-aged child out on a journey to explore himself.

Beto’s not a leader; he’s a wanderer.

Without it being Beto vs. Cruz or Beto vs. a Republican, the media are no longer interested in protecting him from his spazzy self, and without those billions and billions of dollars in corporate propaganda turning him into something he’s not, Beto’s just a weird little entitled white guy leprechaun who married money and still doesn’t give to charity.