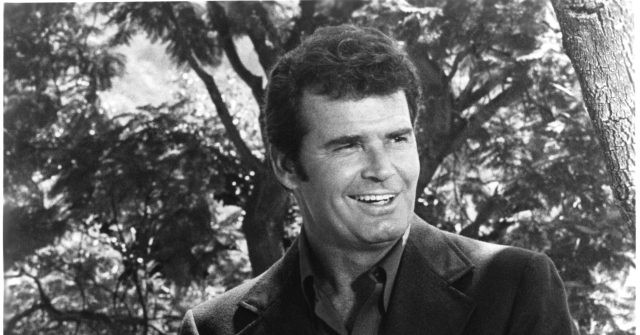 The Rockford Files (1974-1980) is not only the greatest television show ever made; its lead character is the greatest American ever brought to the small screen. The Sopranos, The Shield, Breaking Bad, Mad Men, Lost… All are fantastic television shows, and I could name many others, but none tops a 1970s private eye series that ran for six seasons on NBC.

Created by Roy Huggins (the genius behind The Fugitive and Maverick) and Stephen J. Cannell (the genius who would go on to create — or co-create — The A-Team, The Greatest American Hero, Wiseguy, Hunter, Riptide, 21 Jump Street, The Commish and countless others), the original idea behind Rockford was to bring Huggins’ Bret Maverick character to life as a 20th century, Los Angeles-based private investigator.

For five seasons, from 1957 to 1962, Huggins’ Maverick changed television, for it was Maverick that introduced the idea of the TV anti-hero.

You see, back in the fifties, TV’s Western heroes (and there were literally dozens of them) were all unfailingly honest, brave, noble, and selfless. That doesn’t mean they were simple-minded Dudley-Do-Right types. If you give Gunsmoke or Bonanza or Wagon Train an un-jaded chance, you’ll find plenty of nuance, complicated characters, and moral dilemmas. Those programs ran forever for good reason: they are very well crafted and written.

The difference, though, is that Bret Maverick isn’t a sheriff or patriarch or leader of any kind. He doesn’t hold a regular job. He’s a rounder, a cardsharp, a gambler, a coward, and always reluctant to do anything that won’t immediately benefit Bret Maverick. You see, Bret Maverick doesn’t want to right society’s wrongs; he wants to fleece the table, get the hell out of town, and spend those ill-gotten gains on whiskey and women.

Maverick is rightly heralded as a classic (here’s my review); it’s beautifully written, frequently hilarious, never boring … and it stars (at least for the first three seasons) The Mighty James Garner.

How talented was the late James Garner…?

Let’s start with Jack Kelly, who is blazingly good as Bret Maverick’s brother Bart and Garner still stole the show right out from under him.

In his era, a movie star might have launched his career on TV, but you never went back. It would instantly kill your film career. Garner went back. Again and again he went back and it never diminished his status as a movie star or leading man.

You see, there was only one James Garner…

Garner was as ruggedly handsome as Clark Gable, as roguish as Errol Flynn, as masculine as Burt Reynolds, as stoic as Gary Cooper, as tough as Robert Mitchum, as cool as Steve McQueen, as funny as William Powell, as cynical as William Holden, as likable as Jimmy Stewart, and as charming as Cary Grant.

There was no one else like him, and for more than 40 years, audiences went where Garner went, from TV to movies to TV movies — many of them classics: The Great Escape, The Americanization of Emily, Murphy’s Romance, The Notebook, Support Your Local Sheriff, The Skin Game, Victor Victoria, Sayonara, Grand Prix, My Name Is Bill W., Streets of Laredo… Just to name a few.

And no one else could have played Jim Rockford. It was tailor-made for Garner, lightning in a bottle, and, yes, the most American television show ever made.

Note how I don’t use the word “patriotic.”

Patriotism is something different, and as much as I love patriotism, I prefer Americanism. There’s a time to salute the flag and a time to teach the world how to be an American, and anyone who wants to know how to be an American, or to be reminded of where you might fall a tad short (this includes myself), need only dive into the any one of those 123 Rockford Files episodes.

Rockford is a Veteran who was wounded and won the Silver Star in the Korean War. (Garner, who was also a great American, earned his own Purple Heart in Korea. He also marched for civil rights before it was cool, took no crap from any man or employer, and was married to the same woman for 56 years.)

Rockford’s an entrepreneur who ekes out a hand-to-mouth living as an independent, self-employed private investigator. He could never survive in the government bureaucracy or corporate culture he frequently sneers at.

Rockford cherishes the American Constitution and never stops demanding his rights from the various government officials who constantly harass him.

He regularly challenges, insults, and dismisses authority. Rockford spent years in San Quentin for a crime he didn’t commit and has no love for the corrupt System that put him there, but plenty of love for the Bill of Rights that won his pardon.

Rockford’s  almost always the smartest guy in the room but no elitist.

He drives an American car — that gold Pontiac Firebird.

He eats junk food and meat.

He owns a gun. Better yet he doesn’t have a permit to carry it and still does on occasion.

His independence means he doesn’t take guff from anyone, unless of course he’s in physical danger, then he’ll eat all kinds of crap because he’s no idiot.

He’s a gentleman and chivalrous to the ladies — a real Neanderthal who opens car doors, lights cigarettes, steps into harm’s way to protect them, and yet still treats them as equals.

He’s a reluctant hero who keeps his virtues to a minimum “because they’re easier to keep track of.” In other words, he’s not a pompous virtue-signaler.

He’s loyal to friends — even reprobates like Angel Martin.

He loves his dad.

You’ll never see him in a chain restaurant, only local places, most especially taco stands.

He doesn’t own any plants.

He exceeds the speed limit.

Above all, Jim Rockford is first, last, and always his own man. His independence, his unwillingness to conform to anyone’s idea of how he should live his life, work his profession, or bow to authority is as American as it gets. He doesn’t tell anyone else how to live their life, and as long as you don’t cross that busybody line with him, there won’t be a problem.

You’ll never see Jim Rockford wave a flag or march in a parade or enter a voting booth… But what could be more American than dressing down a surly bureaucrat or choosing to live and work out of a broken down house trailer as opposed to the McMansion that comes with selling your soul to a corporation?

What could be more patriotic than shoving the Bill of Rights up the ass of an officious authority figure abusing his government power or turning down a case because you’d prefer to go fishing and drink beer with your dad?

Mind your own business. Don’t take anyone’s shit. Distrust authority. Keep a gun in the cookie jar. Never conform. Drive a fast car. Pay your own way through life…

He is The American.

P.S. The greatest American character in all of movies is this man.