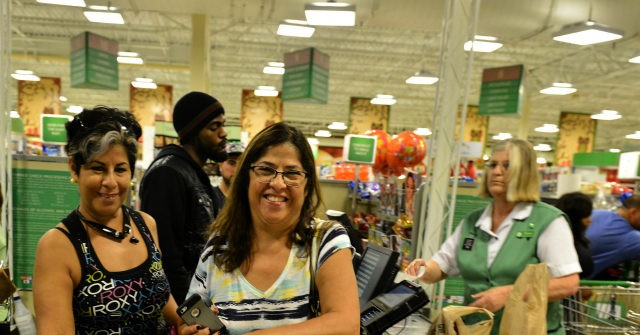 There has been no spike in cases of the Chinese coronavirus in Florida over the last two weeks, despite Gov. Ron DeSantis (R) lifting key coronavirus restrictions and nixing the enforcement of local mask mandates across the Sunshine State last month.

On September 25, Gov. DeSantis took a major step, lifting key coronavirus restrictions at the state level. The order allowed businesses, such as restaurants, to operate at full capacity at the state level and required local governments to “justify” any restrictions on capacity moving forward. Additionally, DeSantis suspended all penalties related to local mask mandates, as he never issued a statewide mandate despite mounting criticisms from the left.

“Just as an act of executive grace, all outstanding fines and penalties that have been applied against individuals are suspended,” DeSantis announced. “I think we need to get away from trying to penalize people for not social distancing and work with people constructively.”

While critics have battered the Florida governor for his approach to the virus in the state — particularly his initial refusal to quickly implement drastic lockdown orders — the state of the coronavirus in Florida has remained relatively unchanged since the governor lifted key restrictions and removed the mask mandate penalties.

On Friday, the Florida Department of Health reported 2,908 new cases of the virus and 118 recent deaths. As the Orlando Sentinel reported, the number “includes deaths from several previous days, as it can take two weeks or more for fatalities to be logged.”

Data gleaned from the Florida Department of Health also shows that the positivity rate remains relatively steady, standing at 4.57 percent as of Wednesday and even reaching a low of 3.73 percent earlier in the week.

New cases also appear to remain steady following DeSantis’s move, ranging from 810 new daily cases (reported September 27) to over 3,300 reported on Thursday. Notably, the case number has fluctuated over the past month, reaching 3,651 on September 10, roughly two weeks prior to DeSantis lifting restrictions.

A brief look at fatalities by the date of death shows a downward trend as well:

No major changes in RE to the state of the Chinese coronavirus in FL following Gov. DeSantis lifting key restrictions two weeks ago.

Charts via the Florida Department of Health: pic.twitter.com/oIRhPJIFPi

Fatalities by date of death also on the decline: https://t.co/Ii8HhSaPW8 pic.twitter.com/vf7fuqGO5V

Despite the steady numbers across the board, some local leaders have expressed disapproval of DeSantis’s decisions — particularly removing the penalty for mask mandates. Miami Beach Mayor Dan Gelber stated that DeSantis made a “political decision” and wrote a letter, asking the governor to reconsider his decision.

“I urge you to follow the CDC and the mainstream view of doctors and scientists, and reconsider your prior Order prohibiting local governments from enforcing individual mask mandates,” Gelber wrote, criticizing the experts DeSantis has relied on in making his decisions.

“The experts you relied on to make the case that mask usage was not necessary, are precisely the same physicians cherry-picked by the White House. Most, like Dr. Atlas, are not even infectious disease specialists,” he continued.

“Others, like Dr. Bhattacharya, don’t even practice in a specialty related to the treatment of this virus. I think it was wholly reckless for you to endorse his outlier view that ‘there is no evidence that shows masks prevent the spread’ of the virus,” Gelber continued.

DeSantis’s order does not prevent localities from maintaining their ordinances, although it does prevent them from enforcement, removing the penalty for those who refuse to comply.

St. Petersburg Mayor Rick Kriseman appeared to agree with Gelber, likening DeSantis’s order to “telling somebody we have a speed limit, we expect you to follow the speed limit, but we’re not going to give you a ticket if you do violate it.”

While some leaders, like New York Mayor Bill de Blasio (D), are pursuing ways to reverse course and institute further lockdowns, DeSantis vowed that Florida will “never do any of these lockdowns again.”

“We will never do any of these lockdowns again, and I hear people say they’ll shut down the country, and honestly I cringe,” DeSantis said during the briefing in Central Florida last month.

Many officials have continued to cite the recommendations of the Centers for Disease Control and Prevention (CDC), which recommends people to wear masks “in public settings and when around people who don’t live in your household, especially when other social distancing measures are difficult to maintain.”

“Masks may help prevent people who have COVID-19 from spreading the virus to others,” the CDC states, adding that face coverings are “most likely to reduce the spread of COVID-19 when they are widely used by people in public settings.” Notably, the CDC does not recommend people  use masks that are “intended for healthcare workers, including N95 respirators or surgical masks.”

In July, CDC director Dr. Robert R. Redfield said that universal masking for one to two months could bring the Wuhan virus “under control.”

“The time is now,” Redfield stated during an interview with the Journal of the American Medical Association (JAMA). “I think if we can get everyone to wear masks right now, we can bring this under control within four, six, eight weeks.”

As Breitbart News reported at the time:

The CDC released a study on Tuesday based on two hairstylists in Missouri who tested positive for the virus but did not transmit the virus to any of their 139 clients.

“With the potential for presymptomatic and asymptomatic transmission, widespread adoption of policies requiring face coverings in public settings should be considered to reduce the impact and magnitude of additional waves of COVID-19,” the CDC wrote.

While the CDC cites previous studies showing that “both surgical masks and homemade cloth face coverings can reduce the aerosolization of virus into the air and onto surfaces,” it notes that “no studies have examined SARS-CoV-2 transmission directly.” Nonetheless, the CDC states that “data from previous epidemics support the use of universal face coverings as a policy to reduce the spread of SARS-CoV-2, as does observational data for COVID-19 in an analysis of 194 countries that found a negative association between duration of a face mask or respirator policy and per-capita coronavirus-related mortality.”

The World Health Organization (W.H.O.) also recommends masks, instructing individuals to “make wearing a mask a normal part of being around other people.”

Dr. Anthony Fauci, director of the National Institute of Allergy and Infectious Diseases, did not initially recommend the widespread use of masks, telling Dr. Jon LaPook, chief medical correspondent for CBS News, that “there’s no reason to be walking around with a mask.”

“When you’re in the middle of an outbreak, wearing a mask might make people feel a little bit better and it might even block a droplet, but it’s not providing the perfect protection that people think that it is,” he said in March.

“And, often, there are unintended consequences — people keep fiddling with the mask and they keep touching their face,” Fauci continued.

He has since reversed his position, contending that people would be “somewhat better off if people were continually wearing masks back then.”

However, Fauci is among several leaders who have been spotted in public places without masks. The list includes New York Gov. Andrew Cuomo (D), as well as Democrat presidential hopeful Joe Biden (D), both of whom have passionately pressed for the widespread use of masks:

Mr. wear your mask not wearing a mask in Georgia. pic.twitter.com/MGPS0ucQNf

Found this picture of someone without a mask on the internet today. https://t.co/NlmjKCY9kC pic.twitter.com/mWubulugQB

While leaving the site of tonight’s CNN Town Hall, Joe Biden made an impromptu stop to talk to some firefighters. “No one has any idea what you all do, it’s amazing. I mean, you’re the only crazy SOBs who run into it,” he said. pic.twitter.com/UyWbfA5NQV

And there’s Dr. Anthony Fauci showing us all he knows exactly how well masks work! Thanks for the lesson, doc. pic.twitter.com/jdHPzq5HfB

I asked the former Vice President if the gloves were off against @realDonaldTrump? @JoeBiden said “yes.”

He also added that when it comes to his support with Hispanic his numbers “are much higher” than Trump’s. pic.twitter.com/6WYExKTb5d

In August, a Duke University study added to the mounting controversy over the effectiveness of universal masking, revealing that some face coverings, such as neck gaiters, are actually worse than going maskless, as they purportedly break down large respiratory droplets into smaller particles, allowing them to escape with greater ease.

We noticed that speaking through some masks (particularly the neck fleece) seemed to disperse the largest droplets into a multitude of smaller droplets (see Supplementary Fig. S5), which explains the apparent increase in droplet count relative to no mask in that case. Considering that smaller particles are airborne longer than large droplets (larger droplets sink faster), the use of such a mask might be counterproductive. Furthermore, the performance of the valved N95 mask is likely affected by the exhalation valve, which opens for strong outwards airflow. While the valve does not compromise the protection of the wearer, it can decrease protection of persons surrounding the wearer. In comparison, the performance of the fitted, non-valved N95 mask was far superior.

Biden has suggested that he would implement a nationwide mask mandate as president, although he has flip-flopped in recent weeks and admitted that such a move may not be constitutionally sound.