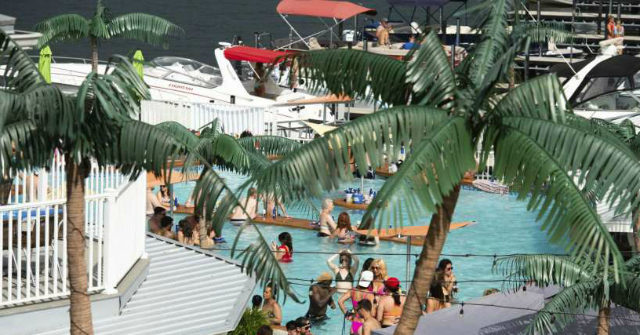 No new cases of the novel coronavirus have been reported among those who flocked to the Lake of the Ozarks over Memorial Day weekend, a top Missouri health official revealed on Wednesday.

“The answer, to our knowledge, is no,” Dr. Randall Williams, Missouri Department of Health and Senior Services, said on Wednesday when asked if there were emerging cases stemming from the crowded weekend.

Concerns escalated after throngs of partygoers flocked to the Lake of the Ozarks, ignoring both social distancing guidelines and the broader call to avoid large crowds. One of the attendees, who reportedly visited various bars, restaurants, and an outdoor swimming pool, later tested positive for the virus and may have been contagious during the getaway:

No covid concerns at the lake of the ozarks😳 #loto pic.twitter.com/Yrb4UNM64u

Positive COVID-19 patient was at crowded Lake of the Ozarks bars over Memorial Day weekend https://t.co/L5AASU2YBR

At the time, the St. Louis Metropolitan Pandemic Task Force warned that the crowds could cause “needless suffering and potential strain to our health care systems.”

“Without a doubt, this type of activity, this type of behavior increases the risk of transmission, which means it can only go in one direction,” Dr. Alex Garza said at the time.

Despite that — and the lack of adherence to guidelines, no new cases stemming from the Lake of the Ozarks partiers have been reported.

According to the St. Louis Post-Dispatch, during Wednesday’s press conference, officials also detailed the overall decrease in positive cases and the “big drop in the number of hospitalizations from COVID-19.”

“Our hospitals are not overwhelmed. Our positivity rate continues to decline. People are recovering, and we are moving forward,” Gov. Mike Parson (R) said.

The revelation comes as protests, sparked by the death of George Floyd, broke out in the streets after weeks of lockdown orders and social distancing guidelines, which warn against large gatherings.

“We don’t know what will happen to these numbers after we see the results of lots of people being together in very large groups during the demonstrations and protests,” Mayor Krewson said, signaling concern.

“Some folks were wearing masks, some folks weren’t. But certainly, folks were not social distancing,” she added. “So we’ll see — fingers crossed — let’s hope that doesn’t result in a big bump up.”

“As far as whether hospitals are able to breathe a sigh of relief after Memorial Day gatherings, Garza said officials ‘will give it a couple more days,’” the Dispatch added.