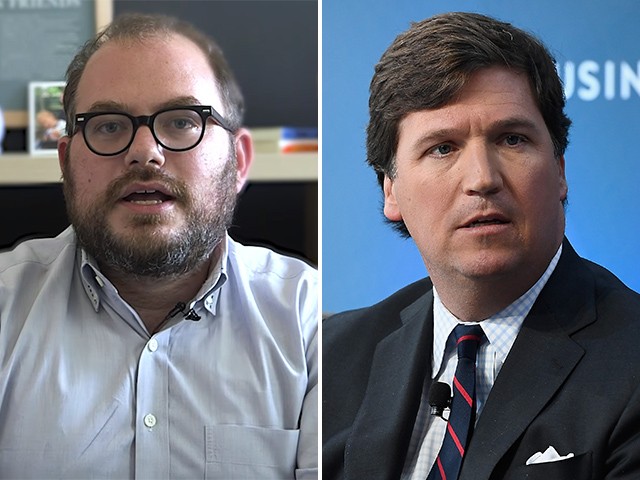 On Wednesday night, a mob of about 20 members of a group called Smash Racism, which is part of the left-wing terrorist group Antifa, gathered outside the home of Fox News star Tucker Carlson. He was preparing to go on the air at the time and not at home, but his wife was, and according to video posted by the group itself, this was much more than a protest.

A second chant was even more threatening: “Tucker Carlson, we will fight! We know where you sleep at night!”

Using their (now deleted) Twitter account, the Antifa group posted the menacing video and wrote, “Tonight, we remind you that you are not safe either.”

Overheard in one video is a woman saying she wished she had brought a “pipe bomb” to Carlson’s house.

Carlson told the far-left Washington Post that the left-wing terrorists “blocked off both ends of his street and carried signs that listed his home address.”

Carlson added, “They weren’t protesting a policy or advocating for legislation. … They were threatening me and my family and telling me to leave my own neighborhood in the city that I grew up in.”

Carlson told Fox News the terrorists “rang his doorbell, broke his oak door” and that his wife “called the police and locked herself into a pantry.”

Despite all of this, Ygelsias admitted he had “no empathy” for Carlson’s wife of 22 years and admitted that “the idea behind terrorizing [Carlson’s] family … is to make them feel some of the fear that the victims of MAGA-inspired violence feel thanks to the non-stop racial incitement coming from Tucker, Trump, etc.”

Thankfully, Carlson’s four children were not at home when Antifa struck, but Yglesias obviously feels Carlson’s entire family, including his children, do not deserve empathy when terrorized.

I think the idea behind terrorizing his family, like it or not as a strategy, is to make them feel some of the fear that the victims of MAGA-inspired violence feel thanks to the non-stop racial incitement coming from Tucker, Trump, etc. https://t.co/hmBTBtcTBM

I agree that this is probably not tactically sound but if your instinct is to empathize with the fear of the Carlson family rather than with the fear of his victims then you should take a moment to reflect on why that is.

Oddly enough, Yglesias does appear to empathize with an apparent illegal immigrant who lives in fear of deportation, even though she has broken the law and is living illegally in the country.

I met a woman who didn’t leave the house for months because she was afraid of being picked up by ICE and never seeing her US citizen kids and husband again.

What sense was there in terrorizing her family?

Yglasias only objected to the terrorizing of Carlson’s family as a bad tactic.

I honestly cannot empathize with Tucker Carlson’s wife at all — I agree that protesting at her house was tactically unwise and shouldn’t be done — but I am utterly unable to identify with her plight on any level. https://t.co/1YRAY8DuWC

Presumably, if terrorizing Carlson’s wife and four children was an effective tactic, Yglesias would be fine with it.

In the wake of his untimely death, Yglesias tweeted “The world outlook is slightly improved with @AndrewBrietbart dead.”

Vox Media is backed by big corporate money, including Comcast-owned NBCUniversal to the tune of $200 million — an investment announced in 2015. The company laid off 50 employees in February 2018.