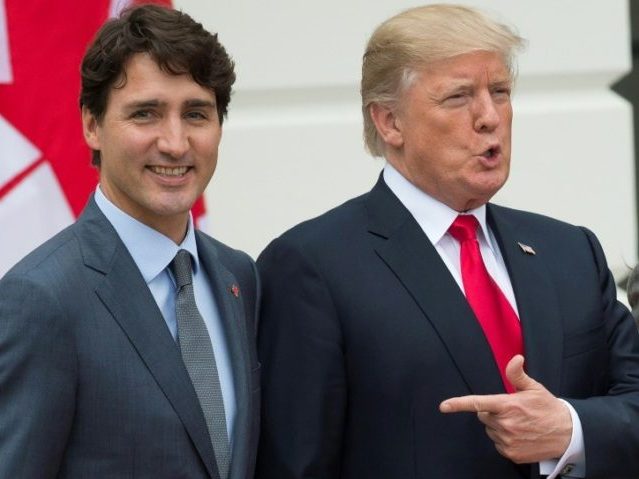 Donald Trump came closer to fulfilling one of his signature campaign promises Sunday night when the U.S. and Canada agreed to replace the North American Free Trade Agreement with the United States Mexico Canada Agreement, or USMCA.

Canada gave in on several fronts it had been resisting, although it won a crucial fight over how disputes between the trading partners are resolved. Mexico had agreed to the trade pact back in August. Sunday night’s agreement means that Canada will join that trade pact.

The deal still must be ratified by Congress. The agreement is complex and details are still be analyzed by trade experts, including lawyers for labor unions. Most of the key provisions do not kick in until 2020, giving legislatures in all three countries time to adopt their provisions into law.

In broad strokes, here are the important features of the new agreement.

The importance of the name change.  The new name of the agreement simply aggregates the three countries that are a party to it. That highlights the basic national sovereignty framework of the agreement. Instead of transnational North America being the operative entity, it is three independent nations. What’s more, the new name puts the U.S. first–as in “America first.”

Also gone from the name: free trade. The agreement’s centerpiece is no longer an economic theory called free trade. Instead, it is an agreement over the circumstances in which trade between the three parties will face lower or no trade barriers.

New rules for auto manufacturing.  The new agreement includes a major goal of the Trump administration: tightening the rules of origin for autos to qualify for zero tariffs.

A car or truck imported into the U.S. from Canada or Mexico will only qualify for zero tariffs if 75 percent of its components are manufactured in North America. The threshold under Nafta had been 62.5 percent, low enough that a lot of manufacturing work on autos was being done outside of North America. This is one of the win-win-win provisions of the agreement since it could result in more manufacturing being done in Canada and Mexico rather than Asia.

Another all around win is the implementation of a minimum wage for zero tariffs autos. Initially, at least 30 percent of the work manufacturing cars and trucks will have to be done by workers earning $16 an hour. That threshold moves up to 40 percent for cars by 2023.

That could push wages up for Mexican workers in the longer term. It is also likely to act as a cap on the amount of work on cars that will be done in the lowest wage areas of Mexico. As a result, more of the manufacturing work that moves into North America because of the 75 percent rules of origin threshold will likely be done in the U.S. and Canada. Politically, the higher rules of origin threshold and wage requirement could help the Trump administration win support for the plan from labor unions and Democrat lawmakers.

Higher auto tariffs could play an important role.  Although the 75 percent rules of origin requirement is a major accomplishment, there may be less than meets the eye unless the the Trump administration follows through on plans to raise auto tariffs.

The current U.S. tariff on cars is just 2.5 percent. As a result, many automakers may choose to accept the penalty for not meeting the North American content requirement rather than pay the higher wages repatriating manufacturing jobs would require. They’ll just pay the 2.5 percent duty and keep making car parts in Asia.

The Trump administration’s trade team is aware of this weakness, according to people familiar with the thinking inside the White House. Fortunately, the administration is currently considering raising tariffs on cars. That would make the rules of origin changes far more effective.

One person involved in the negotiations with Canada told Breitbart News that the decision to replace Nafta before imposing new auto tariffs was important strategically. If the administration had announced the higher tariffs first, importers would have been alerted to the higher costs and fought harder against the rules of origin, the thinking went. Now that the rules of origin are in place, the higher tariffs can be pitched as a way of simply making them effective.

Labor, safety, and environmental standards.  A key goal of U.S. labor advocates and environmentalists was higher labor standards in Mexico, ensuring the right of Mexican workers to organize and join unions. The new agreement accomplishes this and should lead to more powerful unions and better protections for workers rights in Mexico. This helps U.S. workers by decreasing the incentives to move jobs south of the border to take advantage of weaker labor rights. U.S. workers will be able to compete on a more level playing field.

The sunset clause.  One of the crucial flaws of Nafta was that it was built around the idea that it would remain in place forever. As time went on, certain part of the agreement became seriously outdated while others were revealed to be deeply flawed. Changes in the economies of all three countries, including the development of technologies unheard of back in the nineteen nineties, meant that the agreement was a bad fit for the realities of trade.

The new agreement faces a sunset after 16 years unless it is renewed. Every six years, the three countries will meet to renegotiate the agreements, extending the 16-year sunset out into the future. This is a compromise meant to assure the agreement is kept up to date while still providing the certainty business leaders claim they need to invest based on the agreement.

Milk, cheese, and ice-cream. Canada agreed to open up its dairy market to U.S. farmers. This was one of the last sticking points in the negotiations, thanks largely to the outsized political influence of Quebec’s dairy farmers. In the end, the agreement allows Canada to keep its complex system of quotas on milk and dairy products in place while expanding the market share available to U.S. farmers.

Tariff dispute resolution. Trump administration officials sought to pare back the trade policy resolution mechanism in Nafta that gave Canada and Mexico outsized power in complaints when one or more of the three countries complained that a tariff violated the trade agreement. In the end, however, the U.S. agreed to keep the old rules largely intact.

Big business shakedowns ended. One of the most controversial aspects of Nafta is that it allowed companies and investors to sue the governments of Canada and Mexico if they believed a new policy–such as a higher environmental standard–threatened their investment. Critics said this allowed businesses to shakedown the governments for payoffs or subsidies to resolve the disputes.  The new agreement largely does away with this, although it keeps it in place for telecommunications and energy–where investors say they fear the Mexican government may try to nationalize the sectors and want a way of fighting against this.