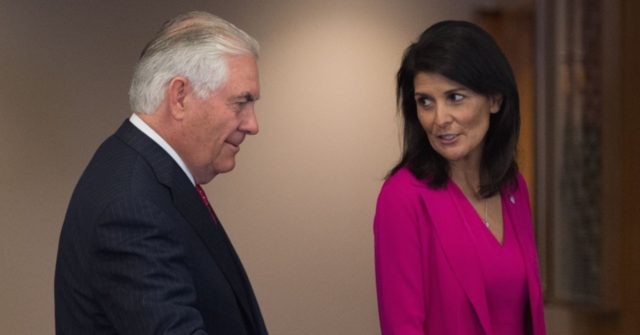 Haley’s claims, made in a new book and reported by the Washington Post, come as former White House aides have told the House impeachment inquiry that they were alarmed that Trump was making his own policy on Ukraine.

In Haley’s book, With All Due Respect, the Post says:

Former secretary of state Rex Tillerson and former White House chief of staff John F. Kelly sought to recruit her to work around and subvert Trump, but she refused …

“Kelly and Tillerson confided in me that when they resisted the president, they weren’t being insubordinate, they were trying to save the country,” Haley wrote.

“It was their decisions, not the president’s, that were in the best interests of America, they said. The president didn’t know what he was doing,” Haley wrote of the views the two men held.

Kelly and Tillerson’s arguments mirror those made by some of the witnesses Democrats called to testify in private before the House Intelligence Committee.

Lt. Col. Alexander Vindman, for example, admitted that he did not know if anything Trump said to the president of Ukraine on their now-infamous phone call was illegal, but that he was concerned that Trump’s views went outside the “interagency” consensus and reflected an “unproductive narrative.”

Haley, who told CBS Sunday Morning that she did not believe the president had done anything wrong in the phone call, has been critical of Trump in the past — most recently, for example, criticizing his withdrawal in Syria.

She repeated her claim that Kelly and Tillerson tried to run their own policy in the belief that they were saving the country.