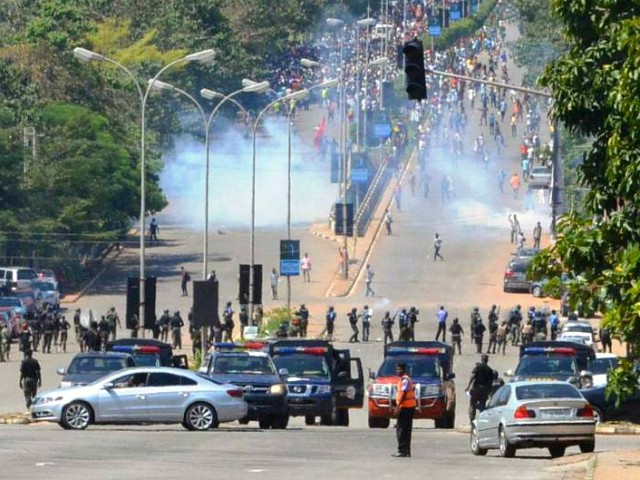 The Nigerian army reportedly killed up to 21 people when it fired live bullets into a crowd of protesters on the third day of demonstrations by the African country’s leading Shiite Muslim movement in the capital of Abuja on Monday.

Ibrahim Musa, a spokesman for the Shiite Islamic Movement of Nigeria (IMN), told the Associated Press (AP) that the Nigerian army killed six people on Saturday and another 21 on Monday.

“Our members were marching peacefully for three hours while observing the Arbaeen March as will be done by all Shiite members in Karbala in Iraq and other countries,” Musa also told CNN.

The protestors are reportedly also demanding the release of their leader Ibrahim Zakzaky, who has been in Nigerian military detention since his arrest in 2015 following a crackdown by the country’s armed forces on IMN members.

Nigeria’s military claims it has only killed six people, adding that the Shiite protesters fired at the soldiers first, AP reports.

In a statement issued Sunday, James Myam, a Nigerian army spokesman, alleged that the troops only shot at the protesters on Saturday to “extricate” themselves from the area after the clashes between the military and IMN turned violent, CNN adds.

“Myam alleged that members of the group attacked a military convoy traveling with ammunition and weapons on the outskirts of the city, forcing the soldiers to engage them,” the news network further reports.

Khalifa Bello, identified as an eyewitness, told CNN the “Shiite protesters threw stones at the soldiers and commuters at a checkpoint, as they marched into the city” of Abuja.

An unnamed eyewitness also told Reuters that the protesters, which the news outlet estimated to number in the thousands, “hurled rocks” and “set ablaze a police car.”

There were no IMN casualties reported on Tuesday.

However, Bloomberg quotes Musa as saying on Monday, “At least 10 of our members have been confirmed killed since Saturday and several wounded. The security agencies carted away the corpses of our members whom they killed.”

An estimated 50 percent of Nigeria’s population is Muslim, the vast majority of whom are Sunni.

On Tuesday, Bloomberg learned from Musa that “the police shot live rounds and tear gas at members of the Islamic Movement of Nigeria who were protesting for the fourth consecutive day the detention of their leader, Ibrahim El-Zakzaky.”

“El-Zakzaky and his wife have been held by state security forces since 2015, in defiance of court orders that they be granted bail,” Bloomberg notes.

Human rights group Amnesty International has accused the Nigerian military of killing “more than 350 men, women, and children supporters of the Islamic Movement in Nigeria (IMN)” and “secretly” burying their bodies “in a mass grave two days after the massacre,” which took place in December 2015.

According to Reuters, the repression of Shiite IMN members, estimated to number 3 million, and the ongoing detention of its leader has prompted activists to accuse Nigerian President Muhammadu Buhari’s government of abusing human rights.

“The crackdown has raised concern that IMN could become radicalized in much the same way that Sunni Muslim militant group Boko Haram turned to a violent insurgency in 2009 after police killed its leader,” Reuters reports.