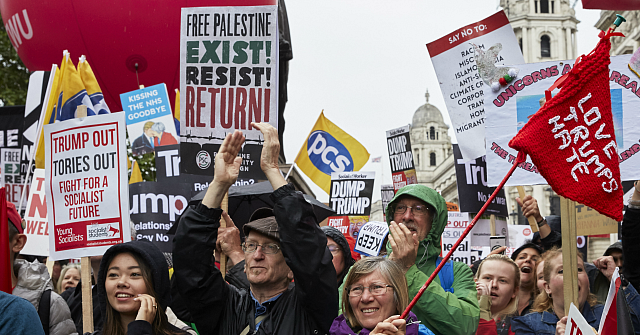 An NHS worker has issued a grovelling apology after screaming “Nazi scum” in the face of a Donald Trump supporter who was also doused with a milkshake during anti-Trump protests in London.

During the protests, a pro-Trump supporter was greeted by an angry mob who set upon him, screaming hysterically in his face that he was a Nazi. Shortly after, a masked protester threw a milkshake in the man’s face, the victim also reportedly being shoved and kicked.

The woman responsible for the abuse, Siobhan Prigent from London who works in the National Health Service (NHS), issued an apology, reports The Mirror.

She said: “I am very sorry for my behaviour today. I should have protested peacefully & I didn’t, & I regret that. I’ve let myself down & I do understand that fully. There are two sides to every story, but my actions were my own, & that’s on me. Please leave my family & friends out of it.”

A Trump supporter is milkshaked by a hostile crowd in Parliament Square.

Prigent, who can be seen in a video holding a sign saying: “This episode of Black Mirror isn’t funny any more! #NoThanksNazis”, has since deleted her social media accounts after a huge backlash against her.

The victim, a grandfather, claimed he was debating with the anti-Trump protesters who he said turned aggressive, after the protesters failed to offer any reasonable responses to his points.

The grandfather told MailOnline: “We have to put forward how aggressive the left can be — it’s not us, you know if they want to call me right wing because I’m supporting Trump then I must be right wing, but I’m not a racist.

“I came out to support Trump, to stop the left who since we voted for Brexit have been protesting against democracy.

“This is the democratically elected president of the free world. I just wanted a debate with the sensible left, I didn’t expect any of what happened. I never wanted it to get violent, but I wasn’t going to be intimidated.”

Police reportedly had to remove the man from the protest for his own safety.

The incident is the latest in a long line of abuse from the left and a general upswing in political tensions with so-called ‘milkshaking’ — in which milkshakes are thrown over anyone the far-left disagrees with — becoming increasingly regular. Such an incident recently happened to Brexit Party leader Nigel Farage during a campaign walkabout.

One charity worker was recently fired for suggesting that, while milkshake throwing was good, she would prefer if it were acid. Ruth Townsley formerly of charity Happy City UK said: “Great that milkshakes have become a thing when it comes to racists in our midst. I’d prefer acid but milkshakes will do for now.”