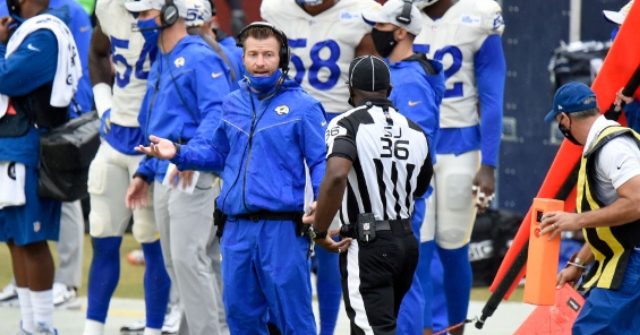 Walking up to a referee and yelling at him is no longer merely ill-advised, it’s now a 15-yard penalty.

A complaint from the NFL Referees Association against Baltimore coach John Harbaugh for yelling at referees – while not wearing a mask- has now resulted in the NFL making any unmasked encounter between a coach and a referee punishable by a 15-yard penalty.

Tom Pelissero of NFL Media reports that NFL senior vice president of officiating Perry Fewell sent a memo to teams on Friday concerning the subject of maskless coaches interacting with officials. It said that officials have been told ‘if an individual not wearing a face covering approaches them inappropriately, they have the authority to take administrative or officiating action.’

According to the memo, those actions include assessing a 15-yard penalty for unsportsmanlike conduct to a coach in violation of the policy.

The NFL has issued a slew of fines in recent weeks for coaches who have openly flaunted the league’s mandate for their coaches to remain masked while on the sidelines. While all coaches comply with the rule requiring them to wear a mask, some have taken liberties by leaving their masks down when conversing on the sidelines or when screaming at officials.

Incredibly, the memo sent buy the league even threatens suspensions and draft pick forfeiture as possible punishments for non-compliance.