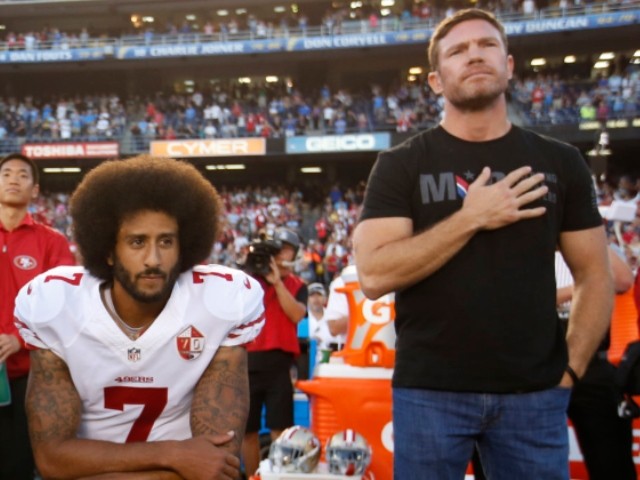 The National Football League is set to air a documentary exploring the controversial player protests during the national anthem, in a documentary produced by a former NFL player.

Indivisible will feature interviews with people on both sides of the anthem protesting issue conducted by former Seattle Seahawks player Nate Boyer, the player who consulted with anthem protest inventor Colin Kaepernick on how to conduct the protests.

The film has not yet been scheduled, but it is being presented as a balanced view of the controversy via interviews conducted by someone who was a central figure in the creation of the protests.

Boyer, a former Army Green Beret, has presented a mixed message about the protests. Initially, he was a critic when Colin Kaepernick began refusing to stand for the playing of the national anthem. But after speaking to Kaepernick, Boyer is said to have suggested that it was “more respectful” to take a knee during the anthem instead of staying seated. It was a suggestion that Kaepernick and many other players put into practice as they sought to protest against the country starting in the 2016 season.

Boyer also appeared on TV this year to claim that fallen soldiers did not die for the Constitution or our rights, but only in their effort to support their fellow soldiers.

Indivisible won’t be a soapbox for Boyer, though. According to Awful Announcing, the documentary will take time to showcase people who have differing opinions about the protests. In the film, Boyer is seen “traveling to different NFL cities and talking to players (current and former) and community leaders (from police chiefs to community organizers) on both sides of the anthem divide about what issues matter to them. ”

While the NFL has already done one film on this topic, 2017’s The Conversation, this will be different in that it will feature someone central in the early stages of the protest controversy.