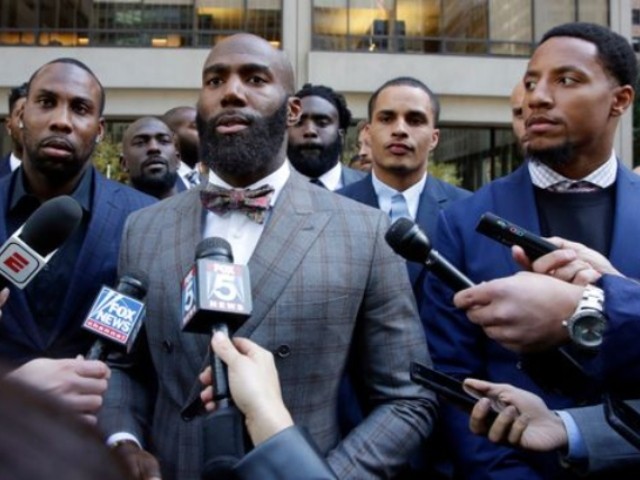 She penned a column this week with the headline: “Players Coalition fights back against Trump at the ballot box.”

The Players Coalition is a group of NFL players focused on bringing awareness to what they believe are systematic problems in the United States, like racial inequality. The coalition formed shortly after former San Francisco 49er QB Colin Kaepernick started the anthem protest movement in the summer of 2016.

“For the past few weeks, members of the Players Coalition have been participating in voter registration drives and doing PSAs to encourage people to vote,”  Armour wrote. “They’ve been lobbying for ballot initiatives that, among other things, would return voting rights to people in Florida convicted of non-violent felonies; reclassify low-level drug possession in Ohio to a misdemeanor; and make it easier to vote in Michigan.”

Eagles safety Malcolm Jenkins, one of the more vocal players in the coalition, believes voting on November 6 is the best way to effect change.

“If we don’t give the public a way to get involved other than point out the problems, we’re not having the greatest impact that we can. The biggest impact we all have is our vote,” Jenkins told USA Today.

The Player’s Coalition is focused like a laser on a ballot initiative called “Florida’s Amendment 4.”

If approved, this would restore voting rights to people convicted of felonies, aside from murder and felony sexual assault, once they served their time.

Former NFL wide receiver Anquan Boldin, who’s the only former player in the Player’s Coalition, is a Florida-native, and is lobbying hard for this amendment to pass.

“It’s something that affects people from different walks of life,” Boldin told USA Today. “It’s not just a black issue, it’s not just a white issue. Speaking to a lot of people (affected), they say they don’t feel like complete or whole citizens again without the right to vote. That says a lot.”

This has been a rough week for Jenkins and The Player’s Coalition. A former member of the coalition, Carolina safety Eric Reid, verbally assaulted Jenkins before last Sunday’s Panthers-Eagles game. Reid called Jenkins “a sellout” and “a neo-colonialist” since the Eagles’ star was  with a $90 million agreement with the NFL that would benefit social causes the coalition endorses.

“I believe Malcolm capitalized on the situation,” Reid explained. “He co-opted the movement that was started by Colin to get his organization funded. It’s cowardly. He sold us out.”

“I’m not going to get up here and say anything negative about that man,” Jenkins said of Reid. “I respect him. I’m glad he has a job. I’m glad he’s back in the league. I’ll leave it like that.”

Jenkins has moved on from that tiff, and is now focused on making an impact on election day, with the Player’s Coalition’s get-out-to-vote initiative.

“This is the way to make our voices heard the loudest,” Jenkins said.