New Zealand police declared Friday they will not forcibly remove anti-mandate protesters from the national Parliament’s grounds in the capital.

Wellington’s police had initially tried to break the protest by arresting 120 individuals last Thursday, in a move that backfired when footage emerged and subsequently went viral on social media of offcers dragging a naked woman by her hair.

Due to the anger caused by the police’s aggressive approach, numbers of protesters built – with over 1,500 individuals replacing the 200 police attempted to move on.

New Zealand’s Police Commissioner Andrew Coster has reiterated “enforcement action taken by police runs the real risk of injury to the public, escalation in numbers of people, and a transition away from a largely peaceful protest to violence”. 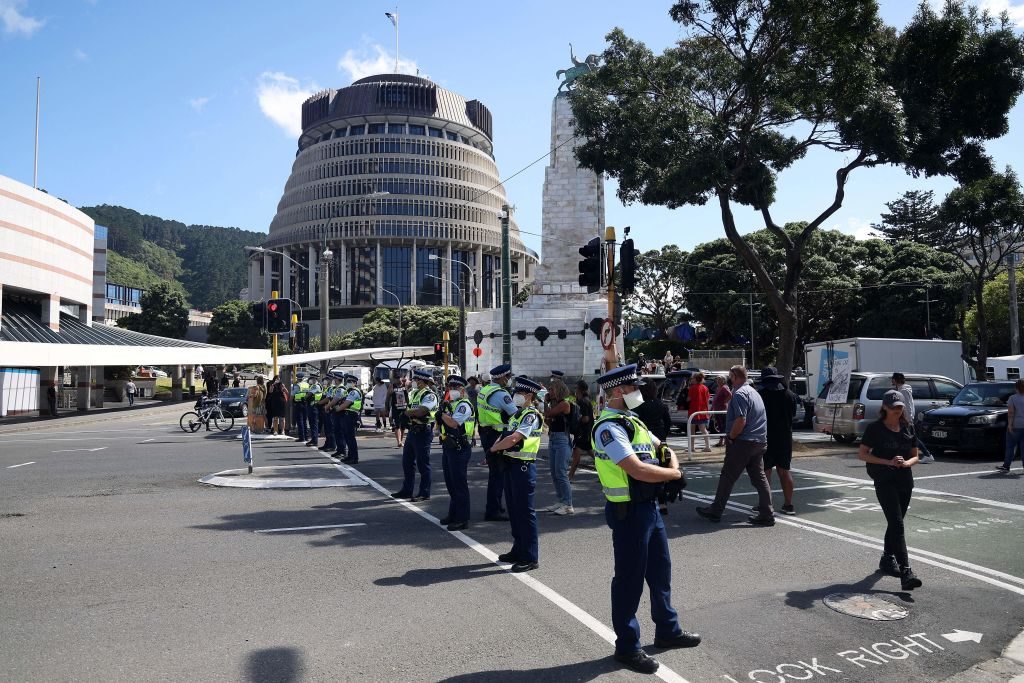 Police take over an intersection leading to Parliament on the ninth day of demonstrations against Covid-19 restrictions in Wellington on February 16, 2022, inspired by a similar demonstration in Canada. (MARTY MELVILLE/AFP via Getty Images)

“In our assessment, the only safe option at the present point in time is a continued focus on de-escalation”, Coster continued in a potential admittance of defeat by the police chief, 1 News reports.

Coster did however say authorities will continue to keep the towing of vehicles in their “toolkit of options”, despite Coster admitting when they announced their plans to tow vehicles on Wednesday it resulted in “growth in the number of people in and around the site”.

Wellington authorities have tried a number of unsuccessful tactics to shift the protestors including attempting to flush the protestors out with sprinklers and playing annoying music such as the ‘Baby Shark’ song, a poor flute rendition of Celine Dion’s My Heart Will Go On and the Macarena on a loop.

This did not however deter those who danced along with the music, sustained by a number of voluntary pop-up kitchens that have been flooded with donations by the New Zealand people.

There is an estimated 800 people at the makeshift camp as well as 450 vehicles blocking the roads, with numbers expected to swell again over the weekend.

Freedom Convoy protestors have remained outside New Zealand’s Wellington Parliament building since protests began last Tuesday, demanding an end to the coronavirus restrictions such as vaccine mandates required for some professionals such as healthcare or police employees as well as the removal of mask requirements in schools.

Those camping at the Wellington Parliament have vowed to remain there “as long as it takes“.