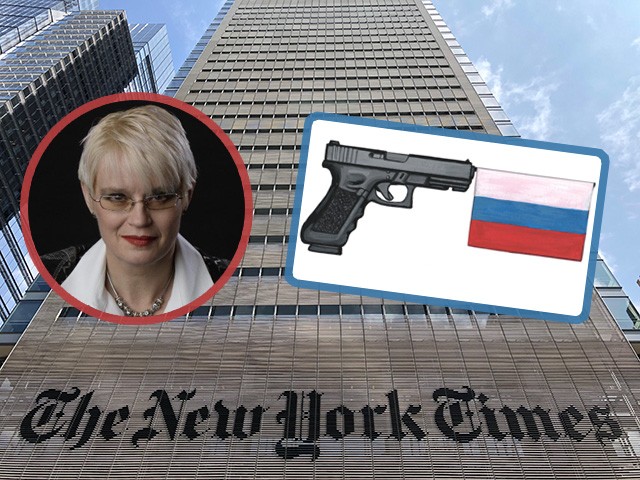 The New York Times published a fictional story Tuesday that fantasized about President Trump’s assassination at the hands of the Secret Service and a Russian operative — one day before the nation was gripped by news of apparent mail bombs sent to prominent Democratic figures.

In an article published in the New York Times‘ Book Review, five writers conjured up fantasy scenarios about President Trump’s future with the Russia investigation.

One writer, Zoe Sharp (pictured), took liberal fantasizing to the next level and wrote a story that ends with President Trump being assassinated by a Russian agent. The Times’ editors illustrate the piece, titled “How It Ends,” with a Russian flag sticking out of a pistol barrel.

In the story, the Russian attempts to shoot the president, but his gun misfires. A Secret Service agent then offers his own pistol to the Russian:

The Russian waited until they were a few steps past before he drew the gun. He sighted on the center of the president’s back, and squeezed the trigger.

The Secret Service agent at the president’s shoulder heard the click, spun into a crouch. He registered the scene instantly, drawing his own weapon with razor-edge reflexes.

The Russian tasted failure. He closed his eyes and waited to pay the cost.

It did not come.

He opened his eyes. The Secret Service agent stood before him, presenting his Glock, butt first.

This assassination fantasy was published just one day before the media exploded with criticism for President Trump’s rhetoric after a series of apparent mail bombs sent to many Democrat political figures Wednesday, including one sent to CNN’s New York office.

Just yesterday, @AuthorZoeSharp published a violent piece fantasizing about the assassination of President @realDonaldTrump in the pages of the @NYTimes.

This sort of stuff is wrong.

Media and entertainment figures fantasizing about the assassination of President Trump has become disturbingly common.

Last year, actor Johnny Depp joked, “When was the last time an actor assassinated a president?” He later apologized. Rapper Rick Ross released a song in 2016 with the lyric, “Assassinate Trump like I’m Zimmerman.”

A Julius Caesar play in Central Park featured the assassination of a faux Donald Trump-figure. And pop star Madonna said at the Women’s March that she had fantasized about “blowing up” the White House.

“Yes, I’m angry. Yes, I’m outraged. Yes, I have thought an awful lot about blowing up the White House, but I know that this won’t change anything,” she said.

And the left’s violent fantasies are not limited to Trump–anyone they disagree with can be targeted.

Republican Sen. Rand Paul, who was at the GOP baseball practice when it was targeted by left-wing mass shooter James Hodgkinson, said that Hodgkinson was screaming, “This is for health care!”

“He also had a list of conservative legislators–Republicans–in his pocket, that he was going to kill,” Paul also said.

Corporate media’s role in this downward slide cannot be ignored, either.

MSNBC’s Nicolle Wallace has repeatedly fantasized about violence toward people she disagrees with, previously talking on air about Sarah Sanders getting choked and Trump getting punched in the face.

Finally, as Breitbart News has meticulously chronicled, there are several hundred incidents of Trump supporting Americans being targeted for violence, harassment, and intimidation by the left.