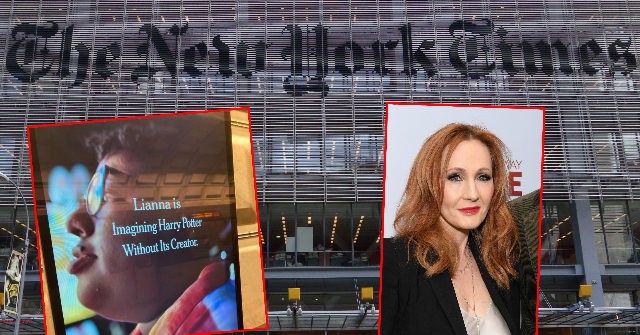 A new advertising campaign by the New York Times is embracing the transgender community’s ongoing attacks on author J.K. Rowling by spotlighting a subscriber named “Lianna” who would like to see Rowling erased from the Harry Potter canon.

The ad campaign, which launched this week, promotes the newspaper’s so-called “independent journalism” while also promoting the Gray Lady as a lifestyle brand. The ads profile four different subscribers from different demographics, each of whom has apparently made the newspaper an integral part of their lives.

In one of the ads, “Lianna” — who appears to be transgender or gender non-binary — engages in a free association of thoughts and ideas, which include “breaking the [gender] binary,” spending a “week in crossword land,” and “imagining Harry Potter without its creator.”

The Times is reportedly running the ads in major cities, including Washington, D.C., Chicago, and Atlanta. A version of the “Lianna” ad appeared in the D.C. Metro system, including the attack on Rowling.

There was a video ad in the DC subway today. I am going to post some stills from this ad, and you will try to guess what company is advertising. Fourth photo is the reveal.

Rowling has come under vicious attack by transgender activists who object to her belief that gender is biological. The author has also expressed her concern that women are being degraded by terms like “people who menstruate.”

“I know and love trans people, but erasing the concept of sex removes the ability of many to meaningfully discuss their lives. It isn’t hate to speak the truth,” she tweeted.

As a result of her views, Hollywood has ostracized Rowling. The author has stated transgender activists have doxxed her and her family, and have sent her violent threats.

The New York Times ad has provoked heated debate on social media. Among the dissenters is acclaimed novelist Joyce Carol Oates, who blasted the newspaper for its “shocking condescension.”