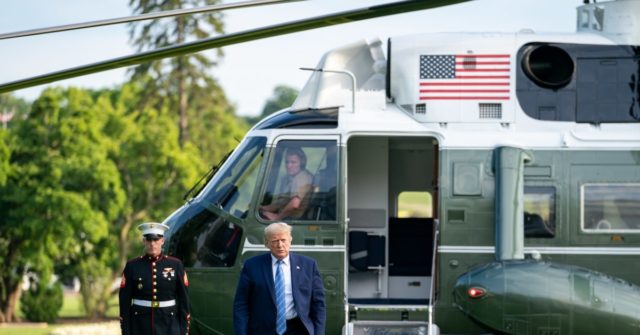 The Never Trump Lincoln Project, led by the likes of Never Trumper Rick Wilson and George Conway, released a negative ad on President Trump on Tuesday, admitting they are “not doctors” yet proclaiming that the president is “not well” and in decline.

The Lincoln Project, an anti-Trump Republican Super PAC that views the president and “those who sign onto Trumpism” as a “clear and present danger to the Constitution and our Republic,” attempted to cast the president as shaky, weak, and unwell:

“So, why aren’t we talking about this? And why isn’t the press covering Trump’s secretive midnight run to Walter Reed Medical Center? Why do so many reporters who cover the White House pretend they can’t see Trump’s decline?” the narrator asks.

“The most powerful office in the world needs more than a weak, unfit, shaky president,” she continues, admitting the Never Trumpers are “not doctors” yet assessing that Trump is “not well.”

“Trump doesn’t have the strength to lead. Nor the character to admit it,” the narrator closes. “We’re not doctors, but we’re not blind. It’s time we talk about this. Trump is not well.”

President Trump has participated in routine check ups throughout his presidency and even underwent an extensive cognitive test after progressives and members of the establishment media convinced themselves that he was on a steep cognitive decline. He ultimately scored 30 out of 30 on the cognitive assessment.

Admiral Ronny Jackson said at the time, in 2018, that Trump was “absolutely” fit for duty.

Last year, Navy physician Sean Conley stated the president was in “very good health” and added, “I anticipate he will remain so for the duration of his Presidency, and beyond.”

Trump also quashed rumors of health issues after making an unscheduled visit to Walter Reed hospital in November, blasting the press for running unsubstantiated stories and describing his stop as a “very routine physical.”

“Anticipating a very busy 2020, the President is taking advantage of a free weekend here in Washington, DC, to begin portions of his routine annual physical exam at Walter Reed,” then-White House Press Secretary Stephanie Grisham said in a statement at the time.

Trump also recently addressed the buzz surrounding his descent from the ramp at West Point, which the Lincoln Project attempts to use as proof of his physical decline.

“The ramp that I descended after my West Point Commencement speech was very long & steep, had no handrail and, most importantly, was very slippery,” the president explained on Saturday.

“The last thing I was going to do is ‘fall’ for the Fake News to have fun with,” he continued. “Final ten feet I ran down to level ground. Momentum!”:

The ramp that I descended after my West Point Commencement speech was very long & steep, had no handrail and, most importantly, was very slippery. The last thing I was going to do is “fall” for the Fake News to have fun with. Final ten feet I ran down to level ground. Momentum!

Meanwhile, serious concerns continue to swirl around Joe Biden (D), the Democrat Party’s presumptive nominee, whose campaign has been largely dominated by misrememberings and awkward campaign moments. He has since remained within the confines of his basement — something the Trump campaign blasted on Tuesday.

“This is obviously a tactic to help him avoid errors and embarrassing, lost trains of thought, while also conveniently preventing the press corps from asking him any questions in person,” said Tim Murtaugh, communications director for Trump’s 2020 campaign.