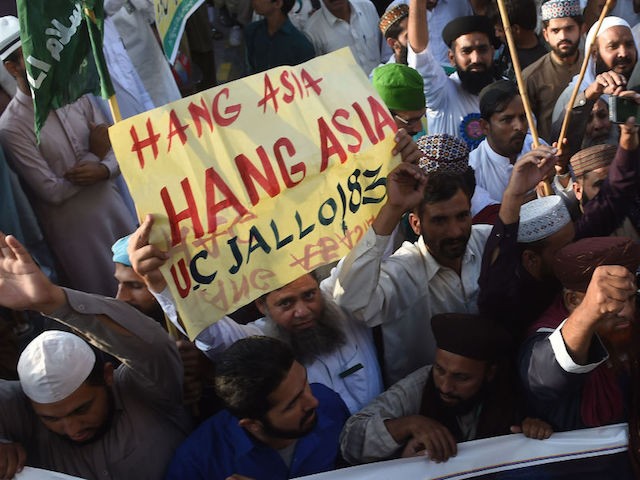 The Dutch embassy in Pakistan temporarily halted visa services on Monday “due to circumstances beyond [their] control” shortly after the attorney representing Christian blasphemy law victim Asia Bibi suggested Bibi and her family were seeking asylum in the European country.

Pakistan’s Supreme Court acquitted Bibi of a death sentence for allegedly insulting Muhammad last month, triggering violent riots nationwide led by influential Islamist groups. The Pakistani government responded by brokering a “deal” with the Islamists to allow yet another appeal on Bibi’s case, though the Supreme Court is the nation’s court of last resort, in exchange for a temporary end to protests.

Bibi’s family has reportedly begun applying for asylum in the Western world, citing calls by thousands of rioters throughout the nation for Bibi to be hung or handed over for a mob lynching. Bibi’s husband and children have stated they have struggled to purchase food without being harassed and threatened in their neighborhood. The latest reports indicate that the family is now together in an undisclosed location.

The Dutch embassy issued a statement on its website Monday with little detail as to why it had paused services.

“Due to circumstances beyond our control, the issuing of visa has been halted temporarily. As soon as this situation is solved, appointments for visa applications can be made through the visa application centers of VFS Global in Islamabad, Lahore and Karachi,” the statement read.

Netherlands Ambassador to Pakistan Ardi Stoios-Braken posted on Twitter a week ago that the embassy “was temporarily closed for 2 days bcs of construction work,” though she did not offer any explanation as to how that situation related to the current shutdown:

The Embassy of the #Netherlands in #Pakistan is open. The issuance of visa has been halted temporarily. Last week, the embassy was temporarily closed for 2 days bcs of construction work. In case of questions/comments, please contact the embassy at 051 200 4444 or isl@minbuza.nl.

The Indian news broadcaster WION News reported that communications within the Pakistani embassy suggested that the Tehreek-e-Labaik Pakistan (TLP) Party, the radical Islamist Party responsible for most of the protests calling for Bibi’s death, had planned an attack on the Dutch ambassador, though not related to Bibi. Instead, the TLP leadership reportedly objected to Dutch lawmaker Geert Wilders, who recently attempted to organize an event featuring haram illustrations of Muhammad and has repeatedly warned against violent Islam.

At press time, the embassy has resumed full operations.

Last week, Bibi’s attorney, Saiful Malook, traveled to the Netherlands seeking asylum, as he was among those on the TLP’s kill list for defending Bibi. Malook later revealed that the Netherlands is seeking to discreetly issue asylum to the Bibi family, though the asylum process requires the family to be within the Netherlands’ sovereign territory. Some reports suggested the Bibi family had the opportunity to fill out an emergency asylum request.

Various reports have suggested that Bibi’s family is seeking asylum throughout Europe. The government of Italy has been the most vocal in offering to save her. Officials there have stated they will do whatever possible to get the family out of Pakistan, though the process appears to have stalled.

“I want women and children whose lives are at risk to be able to have a secure future, in our country or in other Western countries, so I will do everything humanly possible to guarantee that (for Bibi),” Deputy Prime Minister Matteo Salvini said.

The United Kingdom has notably denied Bibi asylum, reportedly in light of its growing Muslim community and its attitudes towards those accused of blasphemy.

Bibi, a Roman Catholic, was arrested in 2009 after two Muslim women accused her of dirtying a cup allegedly “meant” for Muslims by drinking water out of it, then allegedly insulting Muhammad. While blasphemy against any aspect of Islam is a crime in Pakistan, insulting the person of Muhammad carries a mandatory death sentence. Bibi has been on death row since 2010.

As part of the Pakistani government’s deal with the TLP, the radical Islamists have appealed Bibi’s sentence and demanded that government begin the process of placing Bibi on the Exit Control List (ECL), which would ban her from leaving the country. Bibi’s supporters, citing dozens of cases of Christians murdered at the hands of Muslim mobs in the past decade, argue that forcing Bibi to stay in the country would be tantamount to permitting her death.