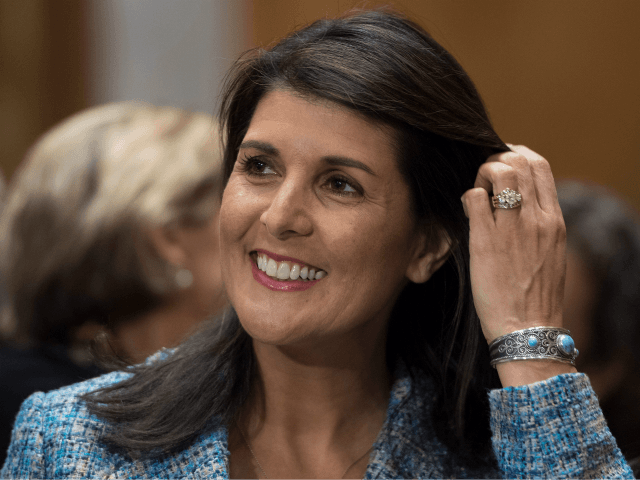 TEL AVIV – American Jewish leaders and Israeli politicians on Tuesday hailed outgoing U.S. Ambassador to the UN Nikki Haley for standing up for Israel at the global body.

Prime Minister Benjamin Netanyahu said Haley “led the uncompromising struggle against hypocrisy at the UN, and on behalf of the truth and justice of our country.”

“I would like to thank Ambassador @nikkihaley, who led the uncompromising struggle against hypocrisy at the UN, and on behalf of the truth and justice of our country. Best of luck!” pic.twitter.com/iWKTVlABkR

President Reuven Rivlin called Haley an “ambassador of truth” who defended Israel’s “right to protect the security of our citizens.”

Her Israeli counterpart, UN envoy Danny Danon, said Haley would “always be a true friend of Israel.” He praised Haley for her part in generating a “change in Israel’s status in the UN.”

Education Minister Naftali Bennett tweeted, “Thank you for what you’ve done for Israel. We will not forget.”

Yesh Atid leader Yair Lapid lauded Haley for fighting “the hypocrisy and bias at the UN with conviction and clarity.”

We thank Ambassador Nikki Haley for her outstanding tenure as United States Ambassador to the United Nations. From her first days, she was a forceful voice for reforming the international body, articulating US interests, and seeking to end the pervasive and obsessive bias against Israel. In a time when the legitimacy of the existence of the State of Israel is constantly questioned in UN fora, Amb. Haley demanded that the UN treat Israel as it would any other nation and she repeatedly took the floor of the UN to denounce the blatant and absurd mistreatment of the world’s only Jewish State. As an effective, courageous leader who reshaped the debate in the UN, Ambassador Haley stood for the values and principles that inspired the creation of this world body. We wish her well and hope that her strong voice will continue to be heard.

Thank you @nikkihaley for your service in the @UN and unwavering support for Israel and the truth. The soldiers of the Israel Defense Forces salute you! pic.twitter.com/uAmBjp6CAa

The American Jewish Committee (AJC) said Haley was “a powerful and effective advocate for U.S. interests at the UN — and a remarkably steadfast and dedicated friend of Israel. We will miss her fearless voice.”

B’nai B’rith International President Gary P. Saltzman and CEO Daniel S. Mariaschin called Haley “a fierce and outspoken critic of the hypocrisy and politicization that is endemic at the UN.”

Ambassador @NikkiHaley has been a powerful and effective advocate for U.S. interests at the UN — and a remarkably steadfast and dedicated friend of #Israel. We will miss her fearless voice.

“Amb. Haley has been instrumental in reclaiming American leadership on the global stage, in stark contrast to the previous eight years,” he added. “Her leadership on confronting Iran, North Korea and the audacious biases against Israel represent a new high-water mark for U.S. diplomacy. Across the political spectrum, Nikki Haley is overwhelmingly respected and liked because people recognize her hard work and accomplishments. Our country is better because of her service.”