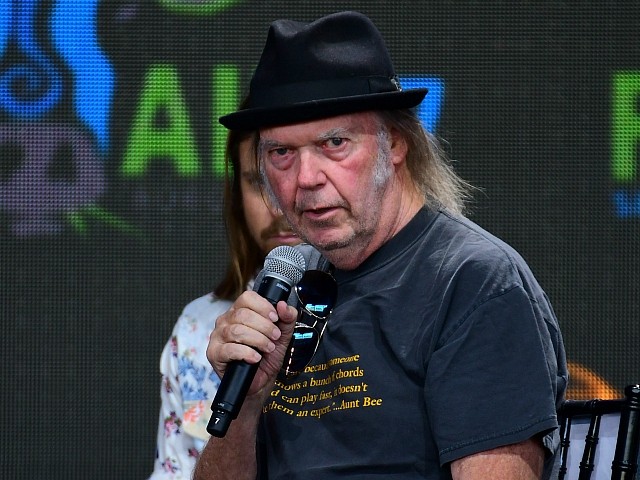 Not all of rock star Neil Young’s music has been removed from Spotify after most of his work was pulled from the music streaming platform in protest of podcaster Joe Rogan.

Last month, Neil Young demanded Spotify remove his music from the platform in protest of Joe Rogan. Spotify complied and Young’s music was removed. However, it appears that handful of his songs remain on his page if they were from soundtracks or other events that featured his work. For instance, his iconic song “Heart of Gold” still remains in its full remastered form on the page as part of the Eat, Pray, Love soundtrack.

Fox Business reached out to Neil Young’s reps for comment on if all of his music will be removed, but they did not respond.

Young had more than six million monthly listeners on Spotify prior to the removal of his music.

Spotify says it will pull left-wing rocker Neil Young’s music from its platform. The move comes just days after Young demanded that Spotify either remove his music or blacklist Joe Rogan and his popular podcast. https://t.co/PkvmhVKkWm

In an open letter to his management team and record label, Young accused Spotify of “spreading fake information about vaccines” while issuing an ultimatum between him and Joe Rogan.

“I am doing this because Spotify is spreading fake information about vaccines – potentially causing death to those who believe the disinformation being spread by them,” he wrote. “Please act on this immediately today and keep me informed of the time schedule.”

“I want you to let Spotify know immediately TODAY that I want all my music off their platform,” he continued. “They can have Rogan or Young. Not both.”

Initially, Spotify said it would unequivocally back Joe Rogan until other artists and podcasters began pulling their work from the platform, which then prompted Spotify to add “content advisory” to shows that discuss the coronavirus.

“It’s become clear to me that we have an obligation to do more to provide balance and access to widely-accepted information from the medical and scientific communities guiding us through this unprecedented time,” Ek said.

In response, Rogan said that he supported Spotify’s decision and that he would try to include more establishment voices in contrast to his more controversial guests like Dr. Robert Malone and Alex Berenson.

Dissatisfied with Spotify’s decision to keep Rogan on the platform, Neil Young then urged Spotify employees to quit their jobs.

“To the workers at SPOTIFY, I say Daniel Ek is your big problem — not Joe Rogan,” said Young. “Ek pulls the strings. Get out of that place before it eats up your soul. The only goals stated by Ek are about numbers — not art, not creativity.”

“Notice that Ek never mentions the Medical Professionals who started this conversation,” added Young. “Look, one last time – at the statements Ek has made.”

Young was referring to the 270 doctors, professors, and physicians who signed an open letter demanding that Spotify boot Joe Rogan.

In his statement, Neil Young also advised the Baby Boomer generation to use their financial capital to “ditch companies contributing to the mass fossil fuel destruction of the earth.” He also told artists to “find a better place than Spotify” to distribute their work.