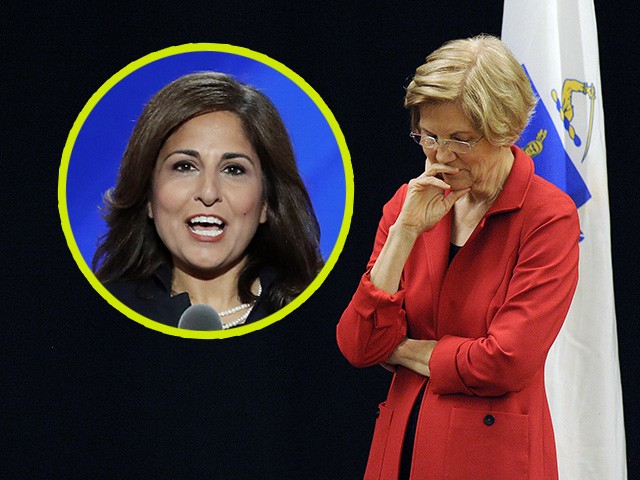 Democrat strategist and president of the Center for American Progress (CAP) Neera Tanden declared Tuesday that Sen. Elizabeth Warren’s (D-MA) DNA test results — which revealed, at most, 1.6% Mesoamerican heritage — end the debate about her claimed Cherokee lineage once and for all.

“No reasonable member of the press or the public should have further questions,” Tanden told Annie Linskey, a Warren groupie whose Boston Globe report on the DNA test results continued a campaign to legitimize the senator’s 2020 presidential aspirations. “It sort of ends this conversation and we can all move on from here.”

While Warren and her far-left supporters have pointed to the results as vindication for years of skepticism surrounding her claims to Native American heritage, not everyone is pleased with the findings. In a blistering statement, the Cherokee Nation lambasted the results, calling them a “mockery out of DNA tests.”

“Current DNA tests do not even distinguish whether a person’s ancestors were indigenous to North or South America,” Cherokee Nation official Chuck Hoskin Jr. said. “It makes a mockery out of DNA tests and its legitimate uses while also dishonoring legitimate tribal governments and their citizens, whose ancestors are well documented and whose heritage is proven. Senator Warren is undermining tribal interests with her continued claims of tribal heritage.”

President Donald Trump on Tuesday morning re-upped his criticism of Warren, slamming the Democrat’s “bogus” DNA test results and said Harvard Law School only hired her as a professor because of her exaggerated claims to Native American lineage.

Pocahontas (the bad version), sometimes referred to as Elizabeth Warren, is getting slammed. She took a bogus DNA test and it showed that she may be 1/1024, far less than the average American. Now Cherokee Nation denies her, “DNA test is useless.” Even they don’t want her. Phony!

Now that her claims of being of Indian heritage have turned out to be a scam and a lie, Elizabeth Warren should apologize for perpetrating this fraud against the American Public. Harvard called her “a person of color” (amazing con), and would not have taken her otherwise!

Thank you to the Cherokee Nation for revealing that Elizabeth Warren, sometimes referred to as Pocahontas, is a complete and total Fraud!

The DNA test, which was not conducted by any of the major DNA-ancestry analysis companies, showed that Warren may have had a Mesoamerican ancestor in her family tree somewhere between six and ten generations ago. The individual who performed the test did not directly compare her DNA sample to a known Native American genetic sample but “used samples from Mexico, Peru, and Colombia to stand in for Native American.”

Linskey and the Boston Globe humiliated themselves by incorrectly calculating the math on what fraction of non-European ancestry Warren could claim, correcting inflated numbers on both the upper and lower estimates hours apart — despite being spoon-fed the story by Warren’s nascent campaign.

Warren premiered a campaign ad-style short documentary in concert with the Globe‘s story which reiterated her family lore that her mother and father had to elope because of bigotry toward her Native American mother, Pauline Reed. That claim had already been debunked by contemporaneous documents showing the marriage took place in a local church and was cheered by the community. Now, Warren’s DNA test further undermines the story, since her mother can, at most, claim a Mesoamerican ancestor five generations prior.