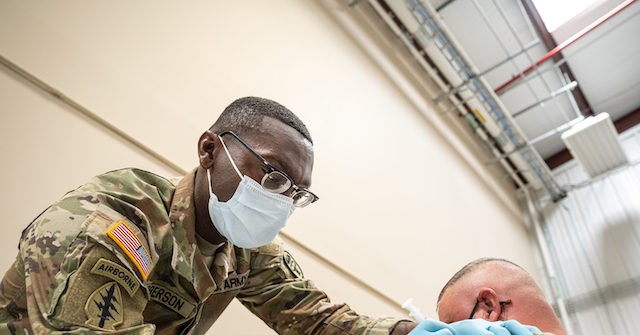 Nearly 1,000 service members have been discharged over the Biden administration’s military vaccine mandate, according to recently released numbers from the military services.

The number to date of service members discharged is at least 948, according to the latest statistics provided by each of the services.

The Navy announced Wednesday they have discharged 240 sailors for not complying with the Biden administration’s vaccine mandate for the military — a big jump from last week’s 118 discharged.

The Marine Corps announced Thursday it has discharged 566 Marines so far, up from 469 Marines last week.

The Department of the Air Force, which includes the Air Force and Space Force, announced Tuesday that it has discharged 142 active duty airmen, up from 125 the week before.

The Army on Thursday said it had no discharges to announce. The service said last week would begin “immediately” discharging unvaccinated soldiers.

While 948 is a small percentage of the overall military force, which numbers more than two million, there are tens of thousands more service members who remain unvaccinated and could be discharged in coming weeks and months.

Thousands More Could be Discharged

The Navy still has more than 8,000 sailors — active duty and reservist — who are unvaccinated, according to the service.

In the Air Force and Space Force, about four percent of airmen — active duty, Guard, and reservists — are unvaccinated, or more than an estimated 19,000, according to statistics from the service.

Some of those who remain unvaccinated are awaiting the outcome of their requests for medical, administrative, or religious exemptions.

“When acting on these three religious accommodation requests, the Assistant Commandant of the Marine Corps determined that, when weighing the compelling governmental interest, the likelihood of their vaccination status impacting military readiness and health and safety was remote because the requesters are no longer serving with Marine Corps commands,” a January 21, 2022, letter from the Marine Corps’ Office of Legislative Affairs to Rep. Darrell Issa (R-CA) said.

The Air Force recently granted nine religious accommodations, but did not give any specifics.

An Air Force spokeswoman said in a statement to Breitbart News on Thursday: “The Department of the Air Force determined the service members’ accommodations could be supported with no impact to mission readiness. We don’t have any additional information for release on these approvals.”

Rep. Chip Roy (R-TX) and Matt Gaetz (R-FL) have expressed support for the idea, with Roy recently introducing a bill that would allow discharged service members to be reinstated, as well as prevent adverse action against unvaccinated service members, as first reported by Breitbart News.