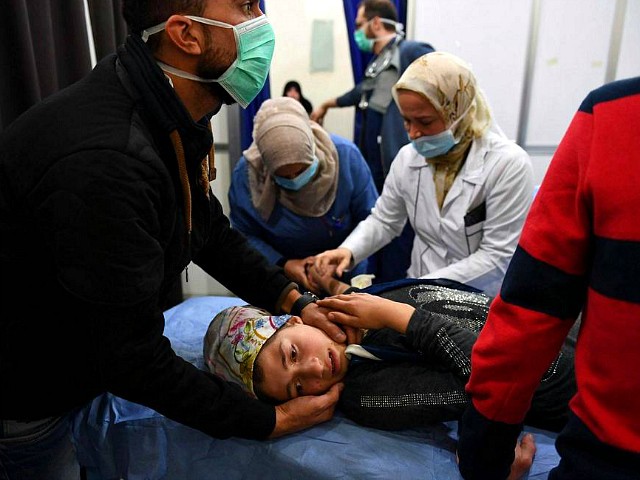 Syrian dictator Bashar al-Assad’s regime and its ally Russia reportedly blamed rebels for a suspected toxic gas attack in regime-held Aleppo city this weekend. A local monitor group reported that the attack wounded nearly 100 people, including many women and children.

“We can not know the kinds of gases, but we suspected chlorine and treated patients on this basis because of the symptoms,” Zaher Batal, the head of the Aleppo Doctors Syndicate, told Reuters. He indicated that the assault marks the “first gas attack against civilians in the city since the [Syrian] conflict erupted more than seven years ago” in March 2011.

The U.K.-based Syrian Observatory for Human Rights (SOHR), which uses ground sources to monitor the conflict, placed the estimated number of people who suffered from “suffocation” after the attack at 94, “including tens of children and women.”

Syrian warplanes have attacked rebel-held areas in the north of the country for the first time in weeks, as Syrian officials said more than 100 people were treated in hospital after a suspected poison gas attack in Aleppo.

The latest wave of shelling and airstrikes in northern Syria is the most serious violation of a truce reached by Russia and Turkey that brought relative calm to the country’s north for the past two months. The rebels, who have denied carrying out any chemical attacks, accused the government of trying to undermine the ceasefire.

No specific group has claimed responsibility for the attack.

On Sunday, Turkish Defense Minister Hulusi Akar and his Russian counterpart determined that “recent provocations,” referring to the suspected chemical attack, were intended to harm the September 17 agreement between Ankara and Moscow to create a demilitarized zone and disarm the rebels in and around Idlib province, which borders Aleppo.

Pro-Assad Russia and Syrian opposition ally Turkey have worked together in Syria in recent years despite being on opposite sides of the conflict.

The Observatory noted that the suspected chemical attack marks the “first” airstrike since Russia and Turkey established on September 17 to create a demilitarized zone and disarm the rebels in and around Idlib province, which borders Aleppo.

“A health official in Aleppo said victims suffered breathing difficulties, eye inflammation and other symptoms suggesting the use of chlorine gas,” Reuters pointed out.

On Sunday, Russia’s defense ministry acknowledged that its fighter jets bombed rebels in the jihadi stronghold of Idlib, home to the country’s al-Qaeda terrorists whom Moscow accused of firing poison gas at Aleppo, Reuters added.

Reuters noted that the casualty toll from the attack is the “highest” in Aleppo since the Russian and Iranian-backed Assad regime took the city back from rebels nearly two years ago.

The Observatory describes the casualties as the second largest in and around the region of Idlib since the September 17 Russia-Turkey agreement.

Saturday’s attack brought the number of people killed since Russia and Turkey struck their Idlib deal to “115,” including both “civilians and fighters in addition to the regime forces and the [Iran-allied] militiamen loyal to them,” the Observatory noted.

Citing a report by the Middle East Media Research Institute (MEMRI), the Jerusalem Post reported on Sunday that “the Syrian regime naturalized thousands or even tens of thousands of Iranians, including members of Iran’s Islamic Revolutionary Guards Corps (IRGC) and Iran-backed militias like Hezbollah that are deployed in southern Syria along the border with Israel.”

Support from Iran and Russia has allowed Assad to remain in power and capture more territory than any other warring party in Syria, including the U.S.-backed Kurds in the northern part of the country.

The United Nations-backed Organization for the Prohibition of Chemical Weapons (OPCW) found that the Assad regime Syrian government used the nerve agent sarin in 2017 and also used chlorine on several occasions, an accusation that Damascus denies.

“No rebel group has been confirmed to have used chemical weapons in the war by the by the Organization for the Prohibition of Chemical Weapons (OPCW),” Reuters pointed out.