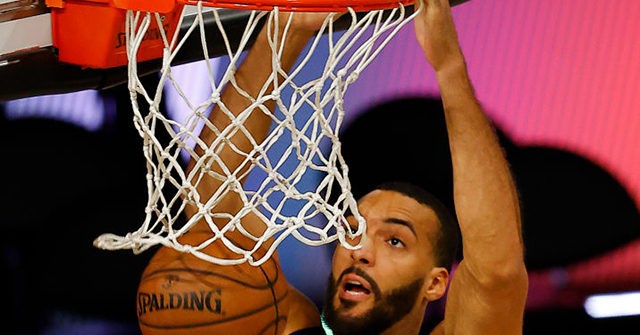 NBA player Rudy Gobert of the Utah Jazz posted a message on social media Thursday in support of ethnic Uyghur people, currently facing the attempted erasure of their culture and identity under communist China.

Gobert is the first NBA player to publicly express support for the Uyghurs and condemn the Chinese Communist Party (CCP), which has placed as many as 3 million Uyghurs and other Muslim ethnic minority people in concentration camps in western Xinjiang province. The last time a person affiliated with the NBA condemned China’s human rights abuses — General Manager of the Houston Rockets Daryl Morey — the NBA lost hundreds of millions of dollars of business with the CCP. Morey apologized for his defense of democracy shortly after making it.

Unlike Morey’s statement last year, which lent support to pro-democracy protesters in Hong Kong, a challenge to China’s Uyghur camps also directly challenges NBA policy, as the league ran a “training” facility in Xinjiang for years, shut down this summer after widespread international outrage over its existence. An ESPN report revealed physical abuse against trainees to be a common practice at the facility.

NBA Commissioner Adam Silver has made business with the CCP a priority during his tenure.

Gobert posted an Instagram story last night — a post that disappears after a certain amount of time — with the words “wrong is wrong” written in white over a sky blue background. The flag of East Turkestan, the preferred Uyghur name for Xinjiang, is sky blue with a white Islamic star and crescent in the middle.

The words linked to a post by French actor Omar Sy, who was, according to the World Uyghur Congress, participating in a global human rights campaign demanding action against China’s Uyghur concentration camps.

Rudy Gobert is the first NBA player to publicly address Uyghur crisis. We thank him for his courage & empathy. pic.twitter.com/xMtpRDEVCT

“Millions of Uyghur Muslims are detained and tortured in concentration camps in China. Not for what they do, but for who they are. It is the largest mass incarceration of the 21st century. It has to end,” Sy’s statement read.

Support @rudygobert27! But now, let’s wait for @KingJames to call him “either misinformed or not really educated on the situation” ‍♂️‍♂️ https://t.co/Feg5Qajxui

Gobert’s statement on the Uyghur camps is the first of its kind from anyone in the NBA publicly on the topic. It follows a challenging period for Gobert in public relations. In March, Gobert publicly joked about the Chinese coronavirus, burping into a microphone and rubbing a press conference table’s items to simulate spreading it. Gobert tested positive for the virus shortly thereafter.

“At the time, I had no idea I was even infected,” Gobert said, also on Instagram, following his diagnosis. “I was careless and make no excuse. I hope my story serves as a warning and causes everyone to take this seriously. I will do whatever I can to support using my experience as way to educate others and prevent the spread of this virus.”

Gobert later pledged over $500,000 to the fight against coronavirus, including social programs in Utah, Oklahoma City, and his native France. Much of the money went to health workers fighting the virus, but some funds were used to help employees at the Utah Jazz stadium struggling during waves of economic lockdowns.

China is believed to have begun building concentration camps in Xinjiang in late 2018, then bussing in millions of Uyghur, Kazakh, and Kyrgyz people. Chinese Communist Party officials branded the concentration camps “vocational training centers” and insisted they were used to help underprivileged communities obtain job skills key to being competitive in the modern Chinese economy. Beijing admitted to teaching camp victims Mandarin, a language common to the Han leadership in Beijing but foreign to Xinjiang, and teaching basic skilled labor.

Those who survived the camps — a small group of people, mostly those with ties to foreign states through their ethnicity or spouse — say that the Mandarin classes were part of an indoctrination effort in which Uyghurs were forced to renounce their ethnic identity, their Islamic faith, and worship dictator Xi Jinping. Many say they experienced beatings, electroshock, and other torture. Among the women, many say they were either personally sterilized through hysterectomies, a surgery that removes the uterus, or knew of other women who were so. Some women said they witnessed the rape of younger women as s casual, routine occurrence.

Slavery also occurs in many of the camps. A study published in March found that 83 international companies — from video game brands like Nintendo to car companies like BMW and clothing retailers like Nike — benefit from Uyghur concentration camp slave labor. In response to international pressure, China appears to have moved many slaves out of Xinjiang to work in factories elsewhere, still forcibly.

An independent tribunal in London concluded, after listening to testimony from camp survivors and studying other on-the-ground evidence, that significant evidence suggests China is harvesting the organs of camp victims for sale on the black market.

“Nothing is more important than to grow the game of basketball here in China,” NBA Commissioner Adam Silver said in 2016, upon the announcing that the league would open a training camp in Xinjiang.

The Urumqi NBA camp was a hotbed of physical abuse, an ESPN investigation revealed in July.

“American coaches at three NBA training academies in China told league officials their Chinese partners were physically abusing young players and failing to provide schooling, even though commissioner Adam Silver had said that education would be central to the program, according to multiple sources with direct knowledge of the complaints,” the report revealed. “American coaches were frequently harassed and surveilled in Xinjiang, the sources said. One American coach was detained three times without cause; he and others were unable to obtain housing because of their status as foreigners.”

The NBA revealed that it had cut ties to the Xinjiang basketball camp in response to an inquiry by Sen. Marsha Blackburn (R-TN) in July.