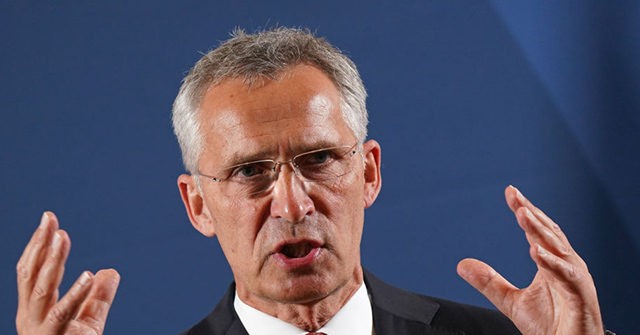 NATO Secretary-General Jens Stoltenberg told the European Parliament on Monday he has “serious concerns” about the Turkish government’s behavior on various issues, “ranging from the eastern Mediterranean, the Turkish decision to buy the Russian air defense system S-400 or related to democratic rights in Turkey.”

“But I believe NATO at least can provide an important platform for discussing these issues, raising these issues and having serious debates and discussions about different concerns,” Stoltenberg continued, suggesting Turkey has not crossed any diplomatic lines of no return.

Stoltenberg’s concerns in the Eastern Mediterranean revolve around maritime territorial disputes with Greece, and its partners in Israel and Cyprus, that seem to be either escalating dangerously or ramping down on any given day.

The current trend is escalation, as Turkey notified Greece, Cyprus, and Israel on Tuesday they will need to seek permission from Ankara before “assuming work on a proposed undersea power cable in eastern Mediterranean waters.” The project would link the power grids of the three nations with the longest undersea cable ever built.

The conflict is superficially about offshore drilling rights, with Turkey claiming the lion’s share of the Mediterranean on the basis of its long coastline. Turkey amplified its claims in a deal with the Tripoli-based Libyan government, denounced as invalid by Greece, that gave Turkey drilling rights off the Libyan coast in exchange for military support against rival Libyan forces.

Many regional analysts believe Turkey is after much more than drilling rights in the Mediterranean. Foreign Policy argued in January that Turkish President Recep Tayyip Erdogan sees his claims in the Mediterranean as a vital step toward rebuilding the Ottoman Empire, with himself as the “caliph” of a rising Islamic superpower, and restructuring the balance of power in Eastern Europe and Central Asia — an agenda clearly of interest to NATO.

The Jerusalem Post on Tuesday saw Erdogan’s near-term goal as separating Israel from Greece and Cyprus, and possibly resetting relations with a skeptical Egypt, thus isolating the Greeks and alleviating international pressure for domestic political reform in Turkey. Wooing Israel has not worked out for Erdogan, so he is shifting to “blackmail” by threatening the Israel-Greece-Cyprus power line project.

The Jerusalem Post portrayed Erdogan as a bull in the geopolitical china shop, blundering from one confrontation to another as his diplomatic outreach efforts fizzle, refusing to accept that Europe, Israel, and Middle Eastern states aligned with the West are never going to become best friends with the authoritarian Islamist ruler of a prison state:

Turkey’s new note shows its real face compared to the claims of reconciliation last year. It has also slammed Kosovo for opening relations with Israel and has tried to sabotage the new Abraham Accords with the UAE and Bahrain. Ankara is also angry that Sudan and Israel are now making peace. These are setbacks for the belligerent country that backs Hamas and has tried to isolate Israel over the last decade.

Up until about 15 years ago, Turkey and Israel had good relations. Since then, however, Recep Tayyip Erdogan came to power and has become increasingly authoritarian while his country has turned into a leading opponent of the Jewish state. It even compared Israel to Nazi Germany in comments at the UN in 2019.

Now, Turkey finds itself isolated in the region. Its only friends are Qatar, Hamas, and the weak Libyan government, as well as some extremists in northern Syria known more for ethnic cleansing and working as mercenaries for Ankara than accomplishing anything else.

Turkey’s dogged insistence on buying S-400 anti-aircraft missiles from Russia was Stoltenberg’s second listed concern. The Trump administration imposed sanctions against Turkey over the purchase in December 2020. Among other objections to Erdogan’s arms deal, the U.S. and NATO were very uncomfortable with Turkey having both advanced F-35 fighters and the Russian missile designed to shoot them down.

In late February, the Pentagon urged Turkey to dump the S-400 missile battery already delivered by Russia in 2019 and cancel the shipment of further missiles. The Pentagon strongly suggested Turkey will not be allowed to rejoin the F-35 program until the Russian missiles are gone.

Erdogan’s government responded by saying it might buy even more Russian missiles, in addition to working on its own indigenous air defense systems. Turkish officials claimed they have not “noticed any direct effect” from U.S. sanctions and anticipated “no clear consequences” for pursuing more arms deals with Moscow.

Democratic rights in Turkey, Stoltenberg’s third stated concern, are looking decidedly unhealthy. Human rights organizations like Freedom House and Human Rights Watch rate Turkey as “unfree” and getting worse. Erdogan was among the many world leaders to use the coronavirus pandemic as an opportunity to crack down on political opposition, stifle dissent, and increase surveillance over his population.

Turkey is one of the worst countries in the world for press freedom, with hundreds of journalists imprisoned since the attempted coup in 2016. “Insulting” Erdogan is a crime under Turkish law and he takes offense rather easily.

Erdogan nevertheless claims to see press freedom as a core Turkish value provided media outlets deliver nothing but “accurate and honest reporting” while avoiding “lies and disinformation.” It is difficult to see how NATO partners can use diplomacy to help Turkey solve problems that its authoritarian ruler insists Turkey does not have.

Balanced against all of Stoltenberg’s concerns is the fact that NATO clearly does not want to eject Turkey, fearful that it could drift more firmly into the orbits of Russia or China. The Europeans are also deeply nervous about Turkey’s ability to flood them with refugees, a threat Erdogan is not shy about making when he feels threatened.

NATO also values Turkish counter-terrorism assistance, a point Stoltenberg himself made last week when he described Turkey as “extremely important” to NATO, citing its proximity to the Islamic State battlegrounds in Syria and Iraq.

Turkey has noted growing sympathy from NATO for its own paramount terrorism concern, the violent Kurdish separatist group known as the PKK, which Turkey claims is indistinguishable from Kurdish militias in Syria that were key Western allies during the Syrian civil war and the battle against ISIS.