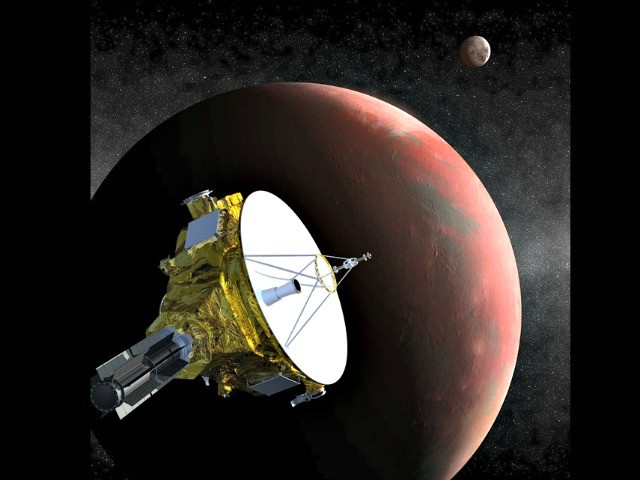 National Aeronautics and Space Administration (NASA) scientists held a “science chat” on their Facebook page on Wednesday outlining the “farthest planetary encounter in history” as the New Horizons spacecraft heads to the edge of the solar system to inspect a mysterious “object.”

The spacecraft will have a “close encounter” with the object just after midnight on Jan. 1, 2019.

“We’re coming down on what is going to be a truly historic event,” said Mike Buckley, a public affairs specialist with the Johns Hopkins Applied Physics Laboratory in Maryland where the scientists manage the New Horizons mission.

“In just over 100 days the New Horizons spacecraft will add another chapter to its remarkable story with a flight past the Kuiper Belt object nicknamed ‘Ultima Thule,’” Buckley said. The new nickname for 2014 MU69 comes from medieval literature and refers to a distant, unknown world.

Ultima Thule is four billion miles away from Earth, having passed Pluto, the last target of the spacecraft’s flyby, in 2015. It’s located in a previously unknown part of the solar system, according to Alan Stern, New Horizons principal investigator, who took part in the chat from the Southwest Research Institute in Boulder, Colorado.

He said the story started with the discovery of Pluto decades ago.

“Its discovery was the harbinger of our knowledge now that there’s a whole third zone to the solar system,” Stern said.

“We’re a billion miles beyond Pluto now traveling at 32,000 thousand miles per hour over 24/7 — on our way to the first flyby to an object out in the Kuiper Belt,” Stern said.

The New Horizons will be the first spacecraft to explore what scientists say is a sea of stars in a deep freeze in deep space.

The flyby will be three times closer to the Ultima Thule than it was to Pluto, an encounter that captured some stunning images of the dwarf planet and its moons.

Scientists compared the Kuiper Belt to an archeological dig because that part of space is like going back in time to when the solar system first formed.

They expressed excitement about the flyby, which will begin on Christmas Day and culminate on the first day of 2019.

You can find out more about the New Horizons mission by visiting http://www.nasa.gov/newhorizons.