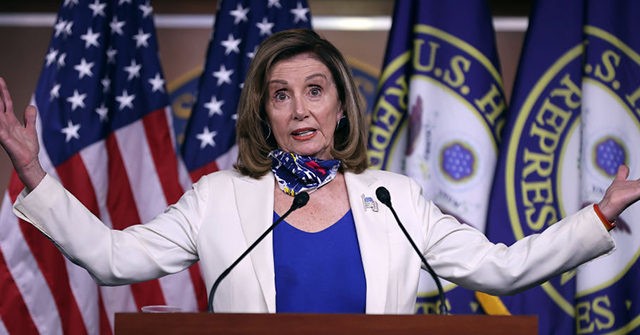 House Speaker Nancy Pelosi (D-CA) appeared on MSNBC’s Morning Joe on Thursday, telling the hosts that supporters of President Donald Trump are not uneducated, but are just “really sad.”

Pelosi was responding to a question on why 46 percent of Americans “thought it was okay” for Trump to be president.

“I don’t think the president has any idea of what the truth is. I think that he thinks the truth is what he says, so it’s a sad situation. But you go back to what Jon [Meacham] said, and Jon said how can 46 percent, or whatever it is, of the American people have thought that was okay for him to be president?” Pelosi said in the interview.

She continued on to say that Trump supporters are not necessarily uneducated, but added that it was “really sad” to see those same Trump supporters be okay with the president’s “total disregard” for the Constitution.

“Many of them took the oath to protect and defend it, and now, all of a sudden the total disregard that he has for the Constitution seems to be okay with them.  That’s sad,” Pelosi said.

But “let’s not characterize them as not educated. They are educated. They’re educated in winning our wars, raising our families, building our communities and the rest,” Pelosi added.

When Pelosi was not taking pity on Trump supporters, she shut down a reporter at a press conference who asked about Democrat presidential candidate Joe Biden’s alleged involvement in his son, Hunter Biden’s, foreign business ventures.

Still, Pelosi remained confident in a separate interview with MSNBC’s Andrea Mitchell Reports that Democrats would take the White House and both houses of Congress.