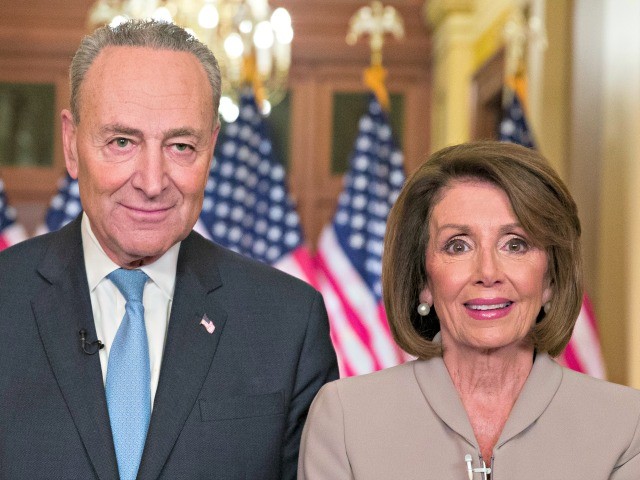 House Speaker Nancy Pelosi (D-CA) and Senate Minority Leader Chuck Schumer (D-NY) said in a televised address on Tuesday night that President Donald Trump was “manufacturing a crisis” over his fight to get $5.7 billion in border security funding.

Pelosi and Schumer rebutted President Trump’s televised address on Tuesday night, contending that President Trump has harmed thousands of Americans with his government shutdown. The Democrat leaders said that a border wall along the southern border is both “expensive” and “ineffective.”

Pelosi said in reaction to Trump’s speech, “Sadly, much of what we heard from President Trump during this senseless shutdown has been misinformation and even malice.”

Pelosi said that Trump was “manufacturing a crisis” with the government shutdown.

The fact is, on the very first day of this Congress, House Democrats passed Senate Republican’s legislation to reopen government and fund smart, effective, border security solutions, but the president has rejected these bipartisan bills which would reopen government over his obsession, forcing American taxpayers to waste billions of dollars on an expensive and ineffective wall. A wall he always promised Mexico would pay for. The fact is the president has chosen to hold hostage critical services for the health, safety, and well being of the American people. And withhold the paychecks of 800,000 innocent workers across the nation, many of them veterans.

The fact is, the women and children at the border are not a security threat. They are a humanitarian challenge, a challenge that President Trump’s own cruel and counterproductive policies have only deepened. And the fact is, President Trump must stop holding the American people hostage.

My fellow Americans we address you tonight for one reason only: the President of the United States, having failed to get Mexico to pay for an ineffective border wall and unable to convince Congress or the American people to foot the bill, has shut down the government.

The New York Democrat said that Trump was “hurting millions of Americans,” whom he treated as “leverage.”

“Tonight and throughout this debate and throughout his presidency, President Trump has appealed to fear, not facts,” Schumer added. “Division, not unity.”

Schumer said, “Make no mistake, Democrats and the president both want stronger border security. However, we sharply disagree with the president about the most effective way to do it.”

“We can secure our border without an ineffective, expensive wall. And we can welcome legal immigrants, refugees, without compromising safety and security,” Schumer added. “A symbol of America should be the Statue of Liberty, not a 30-foot wall.”

“Mr. President, re-open the government, and we can work to resolve the differences over border security, but end this shutdown now,” Schumer concluded.